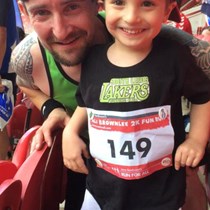 After 2 successful years raising money for Breast and Children's cancer charities this year I have decided to raise money to say thank you to Birstall Pre-School in Birstall for the amazing work they have done and continue to do with Harry and all of the children under their care.

Harry will also be joining in with the running this year. After completing my York and Sheffield 10k's I will then be joining Harry in completing 2 Fun Runs, both a distance of 1.5km. He will also be doing the FunRunForJo 2.5K at Oakwell Hall in Birstall and the Ali Brownlee Riverside 2K Fun Run in Middlesbrough. I will also be accompanying Harry on these runs.

So this year it will not just be myself running for charity, Harry will also be joining in on the action. Roughly I will have run around 180 miles in the races over the year, not including the training miles I will have done by myself and with my amazing teammates at South Leeds Lakers Running Club. Harry will himself have run just over 4.5 miles in his races which for a 3, soon to be 4 year old, is an excellent effort.

Thank you for taking the time to read our story and thank you for any donations you kindly make.

Raising money for Birstall Pre-School as a thank you for the brilliant work they have done for Harry in the past year!