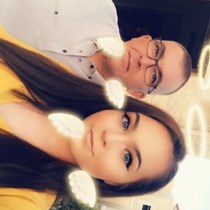 In 2017, my dad- Rob- went for his bowel screening, which he had every 2 years. Only this one was very different. A cancerous tumour was found in the right side of his bowel, where he had NO symptoms. The position of tumour meant that he would have had no symptoms until a drop in iron levels and overwhelming fatigue, by then it would have been to late. From finding out to being operated on it took four weeks, and in that time the tumour had grown a further 2cm. The operation went really well, where 1/3 of his bowel and 27 lymph nodes were removed. He now wears a proud scar from the top to bottom of his stomach!

During this horrific time, just weeks before christmas, the consultant, doctors and hospital staff were amazing (real life superheros) and supported us all in this dark and scary time. Dads cancer was found because he was on a bowel screening programme, as his grandad, dad and uncle all died of the disease. He was invited to join this programme 18 years ago, and often wondered if it was necessary. It saved his life!!!

Thanks to the care of St Helens and Whiston hospitals and the screening programme, despite up and down days my dad is doing really well and sees his consultant every 3 months. To help keep the screening programme running and keep the amazing quality of care within the wards, me and my dad are going to be doing a tandem skydive on the 20th October. Thankyou in advance for your kind donations!