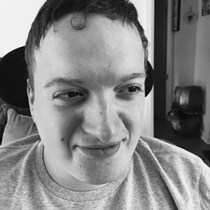 Weʼve raised £1,840 to to help a loving Mum learn about her son's rare condition

Samuel Tyler Kane Boakes, my son, was born in 1998. When he was 4 months old, I was told by specialists that Samuel's brain hadn't developed properly and that he would be profoundly disabled and probably wouldn't live past his 3rd birthday. They added that they didn't know why this had happened and what his life would be like. Every day since then, I have wondered if it would be his last. Not knowing what his condition was, meant that I did not know what to expect.

Thankfully, he reached and passed his 3rd birthday and is now approaching his 20th! He spent most of his life undiagnosed until a genetic test called the DDD Study finally found the problem 2 1/2 years ago. Samuel is only the 12th person in the UK diagnosed with a condition called Bainbridge-Ropers Syndrome (BRS). A condition that affects a gene in his body called ASXL3. At last I thought that I would know what the future holds and would be able to learn all about Samuel's condition. Unfortunately, as it is so rare, there isn't much to learn as there are very few records available.

Geneticists, neurologists and other specialists from around the world have been trying to discover and collate as much information as they can and now, at last, they are ready to share it with BRS families. They have also developed a research program, including all the BRS children which could help future sufferers. Sadly, I do not have the resources to be able to join them, although I would give my right arm to be able to attend. Friends and family have suggested that all you lovely people, many who have helped with 4 Steps for Samuel, might now be able to help me. It really would mean the world to me to not only be at the 3 day meeting and learn all about the condition, but also to meet other families living with BRS. Please consider being a part of that by making a donation, however small and help me get to New York to finally get some answers about Samuel's rare condition. Thank you from the bottom of my heart xxx