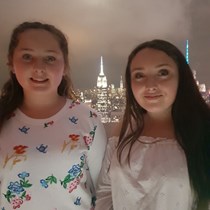 Weʼve raised £0 to Aid the children, men and women at the Thussanang disabled centre in South Africa.

On the 15th February I went out to South Africa to an area called Vryburg. In Vryburg there are many townships but the one that I was focusing on was Huhudi. Huhudi was quite large and was made up of small shacks made out of sheets of metal and rocks. They were no bigger than 3x2 metres and were surrounded by piles of rubbish. But in the centre of the township is a haven for disables children, men and women ranging from the ages of 2-52. A group of 18 people from my school went out there for 10 days to tech the students lessons, sing with them, dance with them and read stories. I taught the children an arts and crafts lesson in which they coloured in the pictures (this was for the less capable students in the Ellies group) and stencilled out animals and creates a world for them on a4 card. (this was fir the Rabbits group, capable, and the Cheetahs who were the most capable).

As were at the school for several days, we did 3 lessons each day to ensure they had lots of fun, that they learnt and became part of a group. The main picture for this just giving page is a girl called Throtatso, everyone calls her screamer as she always screams, but when she was with me she didn't scream. She laughed and repeated words that I said such as okay, amazing and Charlotte which I was very happy about but the ting that made me fully content was the way she looked at me. I had reflective glasses on and she could see herself, when she saw herself she would open up her mouth gasp and say wow, and this was every time that it happened.

On out final day at Thussanang, we all came together in the courtyard and did three lessons. The first one we did was wooden toy cars, we put them together with wood glue and then coloured them in, as you can see in the picture I have pen all up my arms, on my face and on my neck. This is because Throtatso decided to colour me in after she had finished the car along with part of the floor and the instructions. We then had a break and played with the Parachute and then went into the second lesson which was creating time capsules filed with the children's height measured out with ribbon, their handprints, polaroid pictures, pieces of card with information about them including age, name favourite colour and favourite animal and a picture of the 2019 Thussanang time. Finally, we had a music lesson where we sang songs and danced. It was very fun and everyone got involved.

It got to the point where we had to say goodbye to the kids and it was very hard to do. Throtatso, who I adored didn't scream throughout the whole day and this lasted until I said my goodbyes. the thing that got to me the most though is that she didn't scream like she always does, she cried. I didn't want to let her see me cry so I put my sunglasses on and sang "The wheels on the bus" which was her favourite song. We had to get on the bus and go back to the site in which we were staying so I said my final goodbyes and went. This trip was very emotional for all of us so we decided we wanted raise money so that we could feed them two meals a day, 365 years a year.

I have set up this page to spread awareness about this amazing cause because these children to be part of a community and not be isolated due to their disabilities. for one month it is £9.00 to sponsor one child with food so annually that's £108 to make sure a child is nourished which can make a huge difference to the quality of their life and health. I found it very hard to choose one child to sponsor so that why I have set up this page to ensure that every child can have the food that they need. however, I have chosen to sponsor Throtatso and that just one person out of the 51 members there, overall we have raised over £1000 already by doing school events and bake sales. Please help myself and the 2019 Thussanang team to change the lives of these amazing children and ensure that they get the energy that they need to go to the centre everyday to get an education.