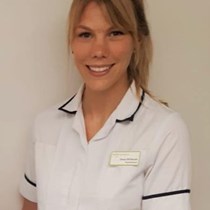 Weʼve raised £3,185 to provide physiotherapy to refugees in Greece and teach rehabilitation in Africa.

In September 2018 I left my job with Leeds Teaching Hospitals and will spend 8 months volunteering as a physiotherapist overseas. I will spend this time working completely voluntarily for three causes I believe in. I hope that you will be able to see how amazing they are by reading my story and how far your money could go in making a difference.

In 2015, at the peak of the crisis, Europe saw the largest influx of migrants and refugees since the Second World War.

I began my time away in Greece and spent 3 months working with refugees, something I have wanted to do for the last few years. Over 1.8 million refugees have arrived in Europe since 2014, mostly from war-torn Syria (UNHCR) and despite the lack of media coverage a huge number of refugees are still arriving regularly to mainland Europe. Whilst in Greece I was based in Thessaloniki, a port city on the gulf of the Aegean. I worked alongside other medical volunteers and split my time between working in a refugee camp and a street clinic, out of the back of an ambulance. At the refugee camp I was able to offer rehabilitation to residents with paraplegia and other neurological conditions as well as attending to the rest of the camp population. In the street clinic, my work was predominantly treating homeless refugees who commonly have musculoskeletal injuries having usually walked for days and often sustaining police beatings during their journey. In my first week I treated a 17 year old boy who was kidnapped by smugglers in Bulgaria and badly beaten. Although my work was predominantly offering physiotherapy, I commonly assisted with minor injuries and wound dressings which are regularly needed in the refugee population. As a long term volunteer I was also responsible for the coordination of our Thessaloniki project to ensure we can keep offering this amazing work.

Uganda has an estimated 256 physiotherapists compared to 54 000 in the UK.

In the New Year I made my way to Africa to begin work in Uganda. In 2011 the country had 1 doctor and 13 nurses for every 10 000 people and only 86 paediatricians to serve 15 million children (1.4 million born every year). There is widespread urban imbalance with the capital housing 30% of the population playing host to 70% of the doctors. Poverty is still a huge barrier to healthcare with many seeking help from traditional healers and communicable diseases are still the leading cause of death in Uganda; the average life expectancy of just 60 in 2018 (WHO). Whilst in Uganda I was based at a school and worked in a small, district, government run hospital to provide physiotherapy as they did not have any. I also worked at a local health clinic and during the days ventured up into the hills providing outreach to patients in the community. Some of these conditions included cerebral palsy and spastic paresis. As I was based at the school when the new year began I also helped the nurse begin the process of screening over 480 school children for general development and signs of illness or malnutrition. When I left we had already managed to screen over 200 of them.

Madagascar is one of the poorest countries in the world and poor sanitation and infrastructure is the likely cause of the recent plague outbreak in 2017 killing 202 people.

My final project, where I am currently, is be based on the island of Madagascar. Madagascar is one of the poorest countries in the world, being ranked 8th in 2018 with an average GDP per capita of $479. Rural areas have the least access to basic health care, clean water and sanitation and as a result diarrhoeal diseases are still the leading cause of death. Since working in Leeds I have been collaborating with Opt In, a charity to share knowledge and deliver training to partner hospitals in low income countries, resulting in sustained improvements to healthcare. I will be working primarily with links established by the rehabilitation team and for 8 weeks working between the main hospital in Antananarivo, JRAH and a smaller rehabilitation hosptial, CAM. My work will be providing group teaching sessions and also engaging in 1:1 observation and education with the therapists to develop their clinical skills. For the last few weeks my work will take me North to Mahajanga where I will work with a consultant from Leeds and another physiotherapist in the development of an amputee program. I hope that any work completed in Madagascar can be carried forward by the Malagasy therapists and through links with Leeds Hospitals I can continue to support this going forward into the future.

In order to fund the work I will be doing I will need to rely on peoples donations. All of the work will be voluntary and the costs are just enough to cover basic costs of living. Without any middle man I will be able to take my existing skills and offer them directly where they're needed as well as teaching valuable skills to ensure sustainability once I leave. Below are some examples of just how far your money could go: 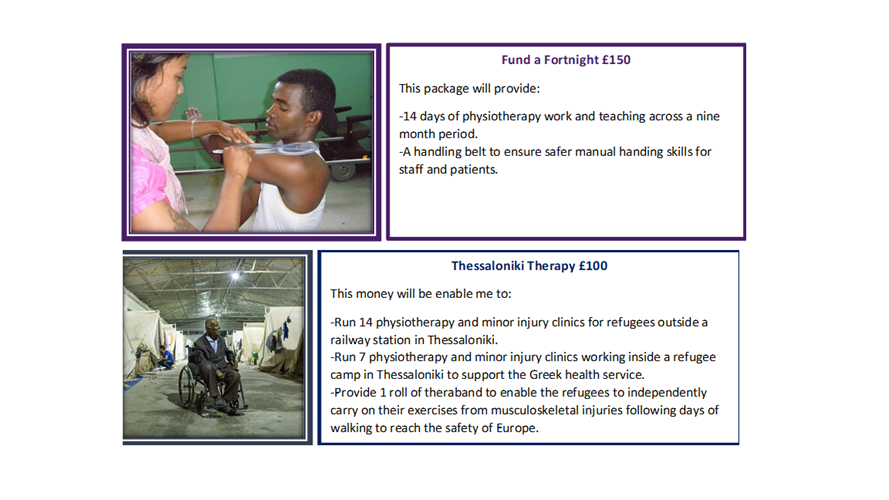 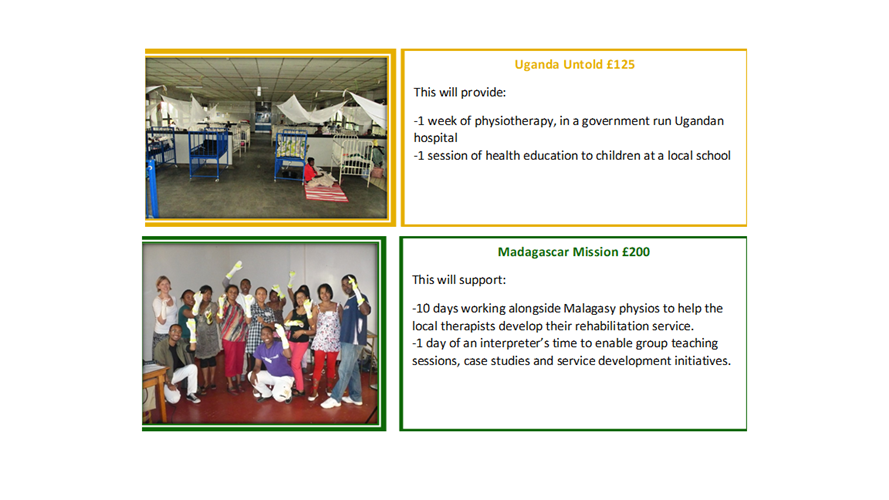 Stay up to date

To keep up-to-date with all of my work I hope to provide monthly updates and regular posts to social media as my way of thanks. By doing this I hope you will see what your money is actually contributing to, as I do it!