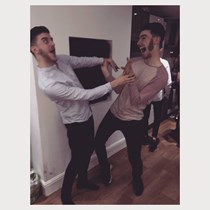 Weʼve raised £720 to Support the Mental Health Charity Heads Together and start people talking about each other's Mental Health. It can effect anyone.

Personally, I'd never payed much attention to Mental Health in my life. I always had thought we've just got this super clever brain that can do anything and won't go wrong or break.

Last year at the end of September having had a great few months of new experiences, jobs and partying I reached my breaking point, I began to feel exhausted.

It all seemed so innocent at first, I was tired and wanted to stay in bed, didn't have much of an appetite and wasn't keen on socialising. However it gradually grew worse and worse and i found myself bed ridden and not being able to be my usual self. I was very anxious and was having a lot of panic attacks as i refused to leave my room for most of the time. At this point I decided to go home which was where the doctor told me I had had burnout/extreme exhaustion a short term mental health DISEASE. This was due to excessive overload of activity I had done over the last 4 months with little rest just trying to do too much. That was all it took. Over the next 4 months up till mid February I can honestly say i've never felt worse and to those who know me reading this you will know I am generally a happy, outgoing chap who loves to socialise. This was not the case, I could barely string a sentence together let alone talk to my friends and complete everyday activities like going to the shop. My mind was just racing. I was very very low at this point and had little hope left I was going to get better, it was horrible. Imagine just not being able to be yourself and having doubts 24/7 that you will ever get out of this hole.

Luckily for me thanks to the great support of my close friends and family who know who they are, I started to feel better. Luckily for me I only had a short term illness but many aren't as lucky. In aid of stopping the stigma for mental health I will be raising money by running for the charity Heads Together at the Leeds Half marathon. We all need to talk about this, one conversation is all it takes.