Update 28/12/2020: worse again. Water inside everytime it drizzles now. If I can't raise this I would at least need to botch it with repair paste as this is causing major damp, water inside and mould!!

Update: walls and damp getting much worse now. Out of control. Mould is getting really bad as well. It has been going on months now.

Update 31st October: update at the bottom of the page. Doesn't seem we are going to raise the money we need for this. Damp and mould getting really bad.

More photos of quotes below for more proof.

I am looking to raise funds to get the gutter replaced and roof repairs done.

Wouldn't be trying to raise the money if it was something that isn't causing damage like it is, but it is causing major damage to the wall, window, inside the house plus causing damp. If the house becomes inhabitable, then I will be homeless as I can't afford rent anywhere!

I am disabled, chronically ill and unable to work. I live on £300 total income as I don't qualify for ESA as I didn't pay enough NI contributions and qualify for UC either, or any other benefit.

The person I live with doesn't have much money either so we really don't have the money for this. I pay money towards bills and they help me with care. I don't have a landlord as I couldn't afford rent anywhere. If I wasn't here I would be homeless so I am very grateful.

If I can't stay here, or the house gets worse, I will be homeless.

There is lots breaking around the house like the boiler, central heating, gutter and roof, the soak-away needs redoing as water just sits on the wall causing mould and damp in the house plus many other things that need fixing but some can wait, some can't like the gutter/roof which is pretty desperate. We don't have the funds and we have no way of getting it. They but don't earn much, and I can't work at all.

I sit everyday in a cold mouldy house and now it is getting worse due to the waterfall down the wall and windowns from the broken gutter and damaged roof stone slates. It is causing damage to the wall in the process and will cause more damage the longer it is left. It comes in the house through the window when it rains.

When it rains water pours down the wall and windows like a waterfall. It gets inside due to the severity.

The stone slates overhang the roof as well as the gutter being broken so water just pours off.

I need to get the gutter replaced with wood as it is a listed house, plus the stone slates at the front have slipped forward.

As it is listed, the appearance has to stay the same, and the same materials. It is a thick stone slate roof.

Trying to get someone to do it, but the money is so much more than I have, even just paying half of it.

Hard to get anyone around here as so many are booked up for 6-8 months or don't return phone calls or emails. I have had 7 quotes so far though and all come around a similar amount, some much more expensive than others.

I got a few quotes. The one that seems pretty decent and is one of the cheapest quotes is £590 + vat (20%) = £708. This includes some stone slate repairs on the roof. This is the best overall quote!! (images below)

Had another quote on the 6th Oct for £638.40 which only is for the gutter replacement. (images below)

I had a different quote which was £740+ vat = £888 which didn't touch the roof so this shows how expensive a job this is. (images below)

This doesn't include all the stone slates being moved back from overhanging the gutter but it does involve repairing the slates that are damaged and that is it.

To get the stone slates pushed back it is a much bigger job as the rafters might be damaged. It would be much more to get it all fixed.

I have been told a few times by different roofers that a re-roof might be needed which would be thousands!!! I need to try everything to avoid that.

So many roofers are so busy they won't even come quote as they have 8-12 months work! So finding someone has been hard.

The main thing that needs doing first is the gutter replacing and the stone state repair which is on that quote attached.

There is so much that needs doing asap with this being the top priority and then the boiler, then the soak-away, then other smaller things.

We have a radiator that doesn't work so the living room is always cold, the damp and mould from the broken soak-away as the water just sits next to the wall.

I never leave the house due to being housebound so all these issues cause me issues 24/7. My anxiety is through the roof and it often feels like my heart is jumping out of my chest due to stress every single day as it has been going on a few months now.

I have no family and no other way to earn any of the money as I can’t work. The person I live with doesn’t get much but what they do covers the majority of bills with pretty much nothing left over.

I never have anything left over on the pennies I live on each day.

Any help would be appreciated. Photo attached for proof. 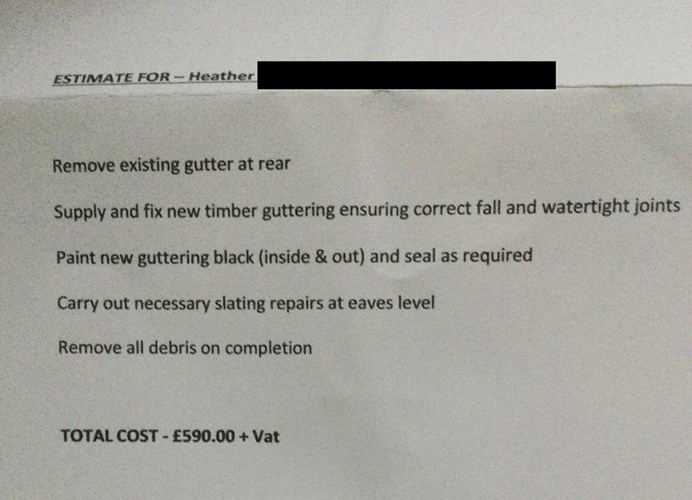 Here is a pic of the £638.40 quote for the wooden gutter replacement (no roof work):

Here is the gutter PRIOR to it getting really bad. It is now very much worse than this! Maybe 20 times as bad now.

First was taken in light rain, second it wasn't raining. 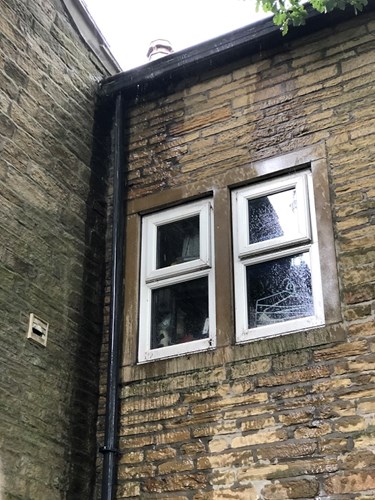 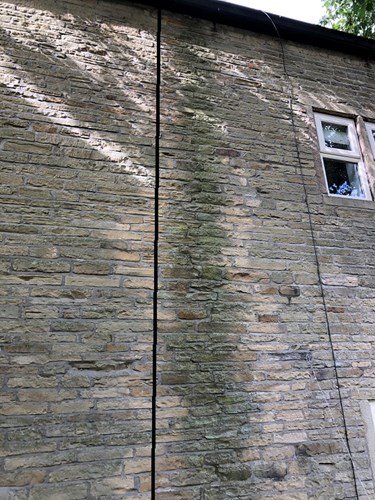 I am a chronically ill and disabled lady who is unable to work and spends all day in one chair as I can barely move due to my health. I live on £300 a month which ends up being 55p-65p a day which is just 2 tiny meals a day.