Weʼve raised £0 to help me get a high-end lock fitted to my door to stop persistent lock-picking that has been going on for years. -> Safety! Sanity! Health!

For more than 12 years, I have been the target of something known as "sadistic stalking". In my case, it has also included a lot of community bullying here in Portsmouth. Or maybe it is only community bullying, who knows. The photo above dates back to April 2019, when I piled many things in front of my door to keep whoever is doing the lock-picking out of my flat. I am a self-employed Dutchwoman in England, working from my home, a small rented flat next to and also sort of behind a small motorcycle shop.

For many years, one or more people have been picking the locks on the door to my flat to carry out all sorts of stuff in my flat when I am out.

Sometimes they carry out small acts of vandalism, sometimes pranks such as flipping switches and pulling out cables, sometimes they leave notes or stickers, but they've also done a few rather bizarre and unsettling things.

Here is a photo of three of the locks I currently have on my door. 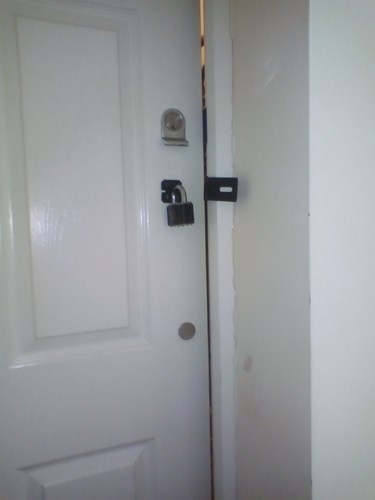 Here is a photo of the chain that I can also use from the outside, when I leave. I knew that this type of chain lock existed so I went looking for it. 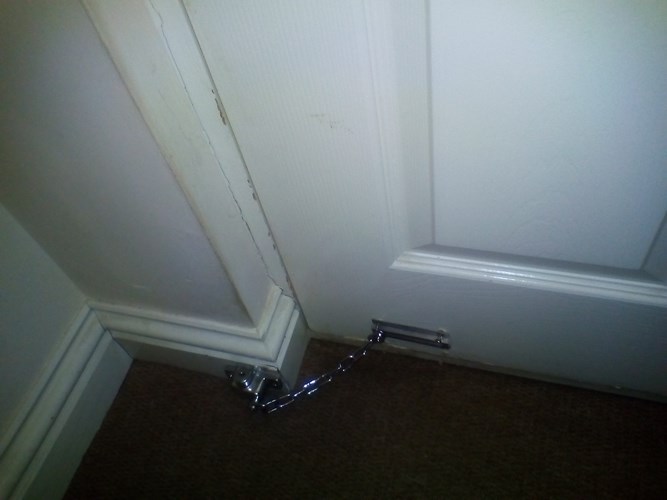 Below is a photo of the remnants of a small mess I found when I came home from London one evening in June 2019. I had already started clearing it up before I decided to take this photo. This is part of my kitchen counter. The lettuces and other greens had been on my windowsill. 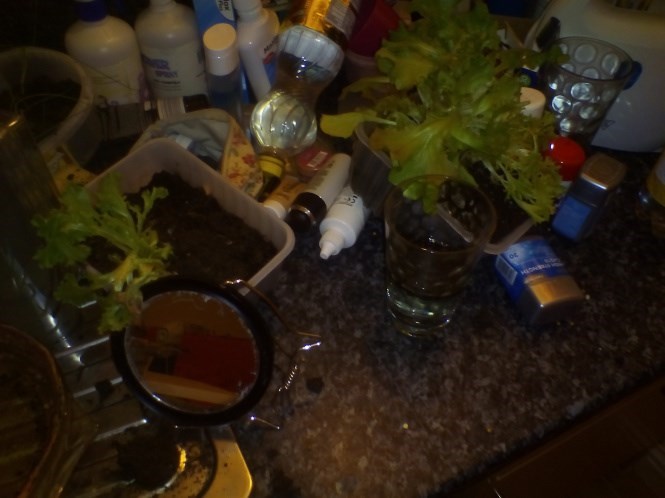 That same year, my landlord tried to evict me twice because I can't support myself under these circumstances. I constantly have to hide things in my own home, which is ridiculous.

The lock-picking has also been done to gain direct access to my computers and any phones lying around, to hack them. In 2020, several client files were deleted or changed on my computer, such as names replaced under photo captions and what not.

It's also for example happened that my computer's operating system could no longer work because it did not have enough space to run. After a lot of digging, I found a deeply buried system folder that was filling up with video fragments that appeared to have been taken with my own phone.

It's been going on for maybe ten years, when I moved in. I only found out about it five years or so ago.

Before that, I noticed odd things that I ascribed to strange coincidences. I sometimes came home to find my door unlocked, for example, and while I was pretty sure that I had locked the door, I scolded myself for having been so careless, as I figured I must have been distracted by something.

But then very clear signs of someone having been in my flat while I was out started to be left behind.

The profile photo shows me standing next to that door of which the locks get picked all the time. You can see one of the present locks, on the right. (The text continues under the photo.)

I've tried a motion-activated camera to see what exactly was going on so that I might be able to go tell someone to stop picking my locks. But that camera did not detect me walking around either, so that was useless. I've also changed one lock and added two. These were all cheap solutions and they did not help.

Particularly the hacking got increasingly out of hand last year (during the pandemic, yes), with files getting deleted and other files being changed on my computer. It got so bad that I had to decide to stop working with my existing clients.

So I have to take drastic steps.

A locksmith is going to stop by and assess - at no charge - whether I will be able to have a high-end lock installed.

If that is possible - and that is likely - then installing the lock will cost me £200 as it will require modifications to the door and door frame. (If not, then I'll need to have some other kind of lock fitted.)

The lock itself will likely cost me between £200 and £300 as it looks like I will have to order one from Canada (https://www.bowleylockcompany.com/). And that means that shipping and customs charges will come on top of the cost of the lock itself.

(Something like SimpliSafe wouldn't really stop the lock-picking. I have had a sound alarm on the door too and triggered it accidentally one day. Nobody even notices such things around here. And I don't need to be alerted that someone is going into my flat. I already know that. I need to keep whoever is doing this out.)

The whole thing’s wreaked havoc on my abilities to support myself and I am in dire straits, financially. I have just had to spend a bit of money because two of my three hard disks suddenly collapsed and the third one was in trouble too. It does not even matter whether this was directly or indirectly related to hacking, I needed to take care of it, obviously, to be able to keep working, certainly right now, with the pandemic forcing us all to do a lot more work from home.

I got so fed up with the various kinds of crap going on that I shot off some more e-mails to the local authorities about what was going on (which has also included direct bullying such as a bucket being emptied over me after two lads first said good afternoon to me from a window just above me when I walked by).

A few days ago, a social worker called and I was so grateful for the validation she provided. For the first time, someone here in England said to me that I am supposed to be able to feel safe in my home and that I can’t under these circumstances. So true! I’ve come home once or twice to find the door demonstratively standing open. That made me feel so violated, so totally “walked over”. It’s like someone spits in your face and you don’t even know who it is. The following morning, when I was taking my shower, I discovered that some really strange crap had been carried out in my bathroom.

I was so pleased that this social worker made the effort of stepping into my shoes for a moment and realizing how this must feel, when someone is often going into your home when you’re out, to do all kinds of things, and you don’t even know who it is and it may not even always be the same person.

So, yeah, having a high-end lock installed is the first thing I now need to do. Without that, anything else I do would be a waste of time. I need to do more, but getting my door secure - keeping whoever is doing this out of my flat – is really crucial.

Will you help me please? Every little bit helps. So don’t feel that your contribution of £2 or so would be useless, because it would actually be very welcome.

I would be so happy if this were taken care of!

Below are two photos of what hardware-hacking on one of my screens has looked like. (I no longer have this screen.) Yes, this was done by a hacker or hackers via direct access to my equipment after lock-picking, which is why I couldn't put a stop to the hacking. I never saw that coming... Who expects people to be picking the locks to your flat? I sure didn't. 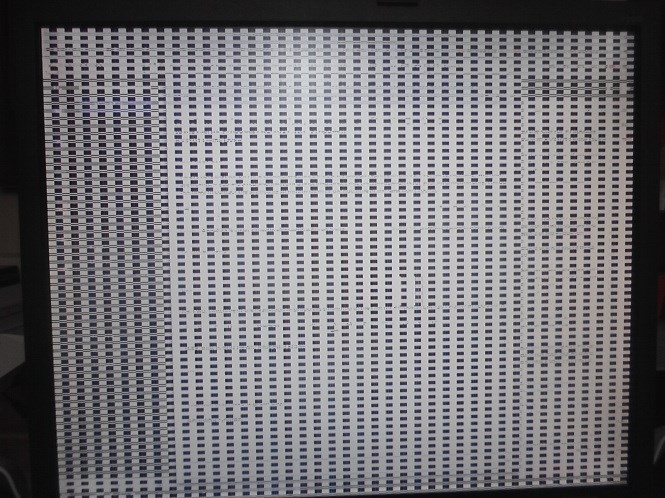 Now imagine that you're up against a deadline...

It's happened that I thought "it's after midnight, but 5 more minutes and then I'll be done". And then this happened, here below. Because my hacker felt that I needed to call it a day. You can get SO STRESSED OUT over something like that and you're lucky if you can sleep at all after that. 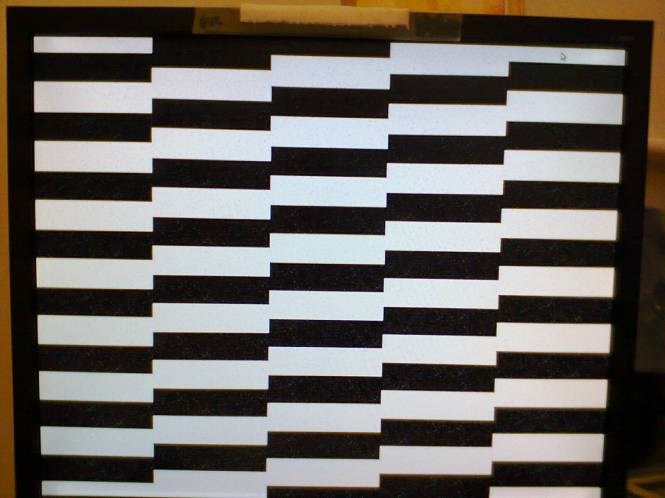 Self-employed Dutchwoman living in England who's previously lived in the US for a while (Florida). Spent most of her adult life in Amsterdam.