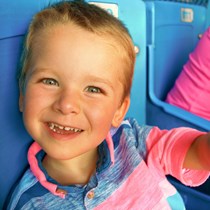 Weʼve raised £11,620 to Get Harry back to Toronto and to Health in Motion for further therapy for his cerebral palsy with the aim to helping Harry walk.

Harry was born two months premature and a routine brain scan during his time in the neonatal intensive care unit it was discovered he had an upper motor neuron lesion. This falls under the umbrella of cerebral palsy.
Harry has been having physio since he was six months old and earlier this year we were introduced by a friend at one of his groups to Health in Motion based in Toronto, Canada.
We managed to self-fund an initial trip out there for 4 weeks of intensive re-education therapy and the results have been amazing. Harry can now, from a laying position get up into a sitting position, and then transfer onto his knees and then up into crawling and he can crawl. This was a little boy who could only sit for a few seconds unaided and would 'commando crawl' everywhere, dragging his legs behind him as they just wouldn't work.
After just one 4 week therapy session at Health in Motion Harry can crawl around all by himself, and can stay sitting up to play as any normal child should do.
Each course of 4 week therapy costs around £5,000 but with the flights out there and accommodation the total comes to around £10,000
The aim of the consultant there our next two visits is to get Harry able to stand and walk unaided and to teach us a daily therapy program to achieve Harry's goals.
There will be several events to try and reach our target - a balloon race is being planned as well as a fund raising night with an auction and raffle.
Harry's mum has said she will complete a skydive and I will also be looking at ways I can complete a challenge to reach our target and get Harry back to Toronto.
Details of all the fund raising events will appear here and also on Harry's facebook page http://www.facebook.com/helpingandfollowingharry
I know we're looking at a big target but if we have the same determination as Harry has shown so far then we can do it!
Many thanks for reading
Mark, Jo and of course Harry!

Being Harry's parents we have tried to go through every bit of his journey with him and want to give the very best opportunity to have as normal life as possible and not let anything get in his way or hold him back.