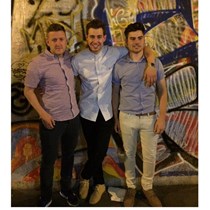 I’m doing a Total Warrior on 5th August with a few lads from my football team, Stockton Churches Portrack FC, and after initially deciding to just do it for fun, we have now decided to run it for charity and, this is why:

My little cousin, Ryan Savage, who, at just 3 years old was diagnosed with Stage 4 high risk Neuroblastoma. He was diagnosed in October 2009 and given a 5% chance of seeing Christmas that year. Now at the age of 12, Ryan is remarkably in remission but still in long term care. He now suffers from 3 of the rarest forms of scoliosis. I think it will be very fitting to run for the Support for Ryan Savage fund.

Then, a few weeks ago, whilst playing cards in my local pub, a bloke asked me what I do for a living and I explained that I work for Fujifilm, a company that helps to manufacture vaccines for a range of illnesses and diseases, including cancer. He explained that his son has suffered from a brain tumour for the last 7 years. Jonny Kelly has a slow-growing non-aggressive tumour called Tectal Plate Glioma and, because of its rooted position, is inoperable.

So, we have decided to run on 5th August for both boys and kindly ask for a donation, big or small, to go towards the £2,000.00 target we have set.

The Total Warrior consists of 10 gruelling miles over hills, rivers, mud and woodland with 25+ punishing obstacles, including fire and ice but ends with an ICE COLD VICTORY BEER!

Any support, however much, would be greatly appreciated.

Many thanks, Stockton Churches Portrack.