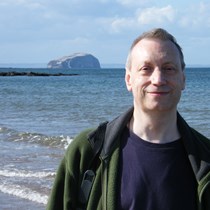 Weʼre raising £2,000 to help pay for life-saving remedies in assisting me to stand up to and fight Motor Neurone Disease. Andrew Hennessey, Scottish, 62. Thank you.

Here is my story. I was born in Edinburgh, Scotland, where I lived most of my life, moving to Fife, a few miles out, in 2010. For many years I have been a mostly self-taught fiddle player, performing in and around the city for the last several with my band, ‘The Wild Geese’. I also had the honour of performing with Nobby Clarke, a former member of the Bay City Rollers, at my last individual gig. Little did I know that a Canadian would fly into my life in 2001 by the name of Robin, also a musician, and we would marry in 2012. However, not only music, I also have a passion for Scotland’s incredible folklore, writing historic and heroic poetry, sometimes setting it to music. I am currently working on ‘God’s Superheroes, The Celtic Saints’, a compilation I am still hoping to complete and share. Finally, I am also a UFOlogist, having observed in Scotland’s night skies some very strange phenomena, which I was invited to share on national and international radio, as well as on TV’s Discovery Channel. My book ‘Alien Encounters and the Paranormal: The Scottish Experience’ was self-published in 2015. However, it is possibly my last job, working part-time as an activities organiser at Bandrum Nursing Home in Saline, Dunfermline, that has been my most rewarding. Whereas I might offer music or a chat, perhaps a bingo game or even just a smile, they, the elderly, the infirm, the dying, taught me how to live, that every breath was worth taking and every life worth living, that each one of them was precious and each one still had a story to shape and tell.

This brings me to now. After experiencing increasing weakness in my arms, in the summer of 2018 I had to give up both my band work and my part-time job at Bandrum Nursing Home. A few weeks later I was definitively diagnosed with Motor Neurone Disease and given approximately two years to live, the average span after someone is diagnosed with MND. You are offered no hope, only palliative care, although that comes in bucket loads, i.e. generously. Unlike cancer, not even curative surgery or radiation can be offered. You are stuck dying UNLESS…you look outside the box, outside the norm.

My wife, while teaching music up in Shetland and before she knew I had the illness, met a woman whose mother had MND and was only given 6 months to live. Luckily, she happened on to an alternative health book by Anthony Williams addressing diet and her illness (and as a medical medium, many other illnesses). The mother, stating at 62 (the same age as I am now) "I’m not ready to die", embarked with the help of Janet, her daughter, on this diet protocol. Although not cured, she is now happily 89 and living a fulfilling life. My wife left Shetland in July 2018 and soon after found out I had the disease, where in addition to weakness in my arms, she also noticed I was slurring my words. She was sent this book by Janet, which diet being mostly plant-based, I have slowly adapted, requiring change to years of acquired eating habits. There is an uncanny providence to all of this and although free, diet does not tell the whole story, as it is theorised that there may be many causes of MND, including heavy metal poisoning. To this end we used the last of our savings, firstly to get second opinions and additional scanning, not only in Scotland but from a Harley Street specialist in London, and secondly to have my amalgam fillings removed, using credit card cash advances when the last of our savings had dwindled out. Again, with uncanny coincidence, my dentist was able to point me to a health clinic here in Edinburgh when I happened to discuss the possibility of chelation therapy (heavy metal detox) in the States where some MND patients were having surprising relief or even cessation of their symptoms. It is for this private clinic in Edinburgh, which has access to cutting edge treatments and testing that I am asking for your financial help. One of the sports I love is rugby and like Doddie Weir, the inspirational rugby great and champion for finding a cure for MND, I, too, must fight the disease on my own level playing field and this is it. Thank you for reading my story and for your kind and generous support. My hope is that at 89 (or even 90) I might be writing another heroic poem or even be fiddling an old Scottish tune, but what is most certain, be telling everyone how I got there.

I have been, until recently, a well-known scottish fiddler, folklorist and UFOlogist. I am in the 2nd year of a two-year death sentence, as there is no known cure for MND, having now lost use of my arms and voice. Our savings are gone, but there is hope and I need your help.