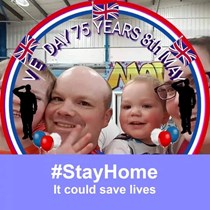 This is the story of my cousin Kay-Marie and her fiancee, Dan and their beautiful baby Daughter, Cora who passed away.

May 8th 2020 we woke up as usual and started our day, Cora was extremely grumpy, screaming and screaming. She wouldn’t eat and just being a very big fuss pot. I gave her cuddles and she settled down. I put her in her chair to get on and do some jobs.

It got to the time for her next feed and she wasn’t waking up, OK she was just tired..I went to change her bum, knowing she would wake. She did, looked around and went to sleep again while I’m changing her. Man she was tired! I sat with her on the sofa, a bottle would wake her, no she scrunched her lips up, not wanting anything, this was strange unlike her, she loved her food.
I sat and cuddled her, she felt a little warm, I stripped her off and looked at her, something wasn’t right, she looked the same as she usually did but I just knew something was not right.
I decided for peace of mind to ring 111, the usual questions were asked. They decided to send a ambulance because she was so non responsive.

The paramedics came out and did usual checks, all of her OBS were normal but again so non responsive. The decision was made to send her to Bristol children’s hospital.

We arrived and got seen straight away, again her OBS were fine but then her leg started twitching, a bit like a dog when dreaming. She was having a seizure. Then we got taken into resus, doctors and nurses surrounded her, giving her medication etc. The whole time a nurse was with me explaining what was happening and what she was bring given. suddenly Cora stopped breathing, I left I couldn’t see that.

I was taken to the family room where a nurse sat with me, the corridor outside filled with doctors and nurses..this was the longest wait of my life. I was then told she was breathing again and was having a chest x-ray and CT scan, once these were taken she would go up to picu. The initial looks of her x-ray and scan came back clear.

I got taken up there and waited for Dan to arrive, once Cora was up there and “settled” in we could go and see her, one by one.
I walked into the ward and was greeted by the most amazing nurse, Cora was laid in a little bed, not breathing by herself and wires and tubes all over her, I was told exactly what they were doing and why. We still had no idea what was going on and why she had gone downhill so fast. She was sedated and looked so peaceful.

Saturday 9th May
What seemed to be the longest night of my life I walked back into the ward to be met by the consultant, he explained that he thought she had an infection but it was attacking a part of her brain, and the likelyhood of her having brain damage was high! What? How is this possible?

More time went on when we were asked to go into the meeting room, the consultant had again explained what he had mentioned previously.

They were taking her for a very in depth MRI which would take hours to find out what the infection was and how much of the brain it was affecting.
Hours went by, the longest we had to wait for any information, then the time came to be sat back in that meeting room.

We were told the infection had attacked the hole of her brain and should she survive (a very very big if) she would be extremely extremely brain damaged! She wouldn’t be able to breathe by herself, eat by herself, walk, talk etc etc.

I looked at the consultant straight in the eyes and asked him “do we need to make a decision?” he looked back at me with such compassion in his eyes and I just knew, either way she wasn’t going to survive this! I had made my decision, how could I let my little girl go through this? It wouldn’t be fair!

Dan and I took some time to talk but we knew we had to let our little girl go.

Arriving back on picu we discussed our decision with everyone who was involved in her care, then we were told what would happen next.

We were taken down to a room where Cora was, knowing this was the place she would be set free.

Dan’s mum and aunt arrived and sat with us, the doctor explain what would happen and the process. Cora had moulds and hand and feet prints done.

Dan and I made the decision to not be there when she passed, how could I watch my little girl die? Dan’s mum and aunt agreed they would be there holding her when she finally passed.

Sunday 10th May 2020
The time came for Dan and I to say our goodbyes, never in a million years would I ever think that I would be letting my child leave us but I had to remember it was the only fair thing for her, even though my heart was bring ripped out of my chest! We had our time and said what we needed to say, kissed her, stroked her face, held her hand, kissed her more. Then it was time! The next time we were going to see out little girl she would of passed away!

Hours passed sitting in a room, knowing any minute my baby would be bought to me. I felt numb and heartbroken.

There’s was a knock on the door, Dan’s mum, aunt and Cora’s nurse were there holding my baby, she had gone, wrapped up in her blanket with her bunny and Teddy she was handed to me. My little girl looked so peaceful. She passed peacefully and was surrounded with love. She looked perfect as she always did. I cannot explain the pain you feel. Emptiness,numbness, there is no explanation. My little girl was now ready to grow her wings at just 17 days old.