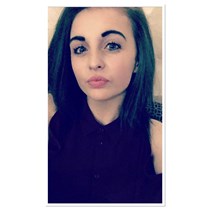 Tye has been very poorly. He has lost over half of his body weight. It started 6 weeks ago not being able to keep his food down or emptying his stomach, which resulted in his stomach and intestine being full of fluid. After many visits to the vets, he was rushed into Langford Vetenary Hospital in Bristol. He had blood tests + CT scan but nothing abnormal showed up. The next step was surgery to see if there was a blockage but there wasn't. Although a small lump was found on his stomach wall so they sent for a Biopsy. Turns out, it is a rare cancerous lump which is a Neuroendocrine tumour that they don't know much about.
Tye is fighting so hard; his catheter has been removed and he is making progress by eating on his own now. Tye is home now but he needs a lot more treatment to help his recovery- he is insured but has now exceeded his £3000 limit. If you would like to make a donation to help Tye recover, it would be highly appreciated! Tye has touched many hearts with his presence and by being our little mascot for our Charity events but it's time for him to recover and get back to his healthy , bubbly self!
Thank you for taking the time to read this.
Love Jackie, Roger, Alex, Shannon, Molly, James & Jack.
Any extra contributions WILL be donated to Langford Vetenary Hospital!