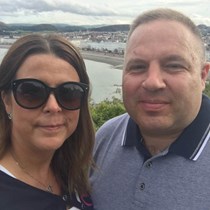 The people in the cover photo are my whole world. My son, husband and daughter.

My name is Melanie and I am asking for your help to raise the money for specialist treatment to prolong the life of my husband Mark.

In October 2016 he was diagnosed with bowel cancer and given the news that it could be treated with chemotherapy but he had to undergo keyhole surgery beforehand. After this, on the 13th January 2017 Mark underwent his first round of chemotherapy. It took its toll on him for the first few days after having it, but this didn't stop Mark leading his life as normal. He still continued to work at his job as a Maintenance Manager, rarely having a day off. After having routine scans throughout the treatment to check on the progress of the cancer he was finally given the news the cancer had gone from his bowel. So after his last chemotherapy session, he was surrounded by myself and his children (Lauren & Aaron) as he rang the end of treatment bell. As it clearly states on the plaque 'Ring this bell three times well, its toll to clearly say, my treatment's done, this course is run and I am on my way!'.

Or so thats what we thought.

After a routine scan a few weeks later, it revealed Mark had a lump about the size of a 50p on his liver. there it was again, the cancer had now spread, and a further scan revealed there were several more tumours. It hit the family hard knowing Mark would have to go through the treatment process once again. Fast forward to September 2017 and the chemotherapy started again. However, this time around it was different. In November Mark picked up an infection and was taken to hospital by ambulance, he was admitted for several days being given antibiotics through a drip. Mark went on to endure another 4 infections from November to the beginning of March 2018 during which time he wasn't given any chemotherapy. He also had a blockage which meant he had to undergo surgery to insert stents into his bile duct to help release the deadly toxins building up in his liver.

Then came the devastating news on Tuesday 20th March 2018 that the Doctors could do no more for Mark, he wasn't going to get any better, he was classed now as being terminally ill.

I don't usually like to ask for help, however, the treatment for Mark is very expensive and as a family we cannot afford to fund it ourselves.

Thats where the help from you all comes in. We have found a specialist organisation which offers testing that identifies drugs that can specifically target his cancer without damaging healthy cells therefore prolonging Marks life expectancy.

I am becoming increasingly desperate to gain extra time for Mark to enable us all to be together as a family for as long as we can. Our whole family have gone through this emotional journey alongside Mark, providing support and strength to each other and we are not ready to give in to cancer.

I just want to say thank you for taking the time to read this post. We are all guilty of not appreciating the time we have with somebody until it becomes to late. So, PLEASE if you can donate any money to fund this treatment, we will as a family be eternally grateful.