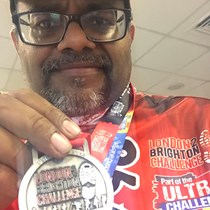 Weʼve raised £700 to serve homeless and underprivileged children by providing them shelters and right education for a brighter future.

According to a report from UNICEF estimated that 100 million children were growing up on urban streets around the world. More recently the organization added, "The exact number of street children is impossible to quantify, but the figure almost certainly runs into tens of millions across the world. It is likely that the numbers are increasing. The one hundred million figure is still commonly cited for street children, but has no basis in fact. Similarly, it is debatable whether numbers of street children are growing globally, or whether it is the awareness of street children within societies that has grown."

I hope this will be enough to state the facts and needs to do something at individual level.

Vikas has been and continue to serve others in need. Homelessness and schooling is perennial problem in many countries. Providing comfortable shelter and right schooling for underprivileged children is key to ensure a brighter future for them.