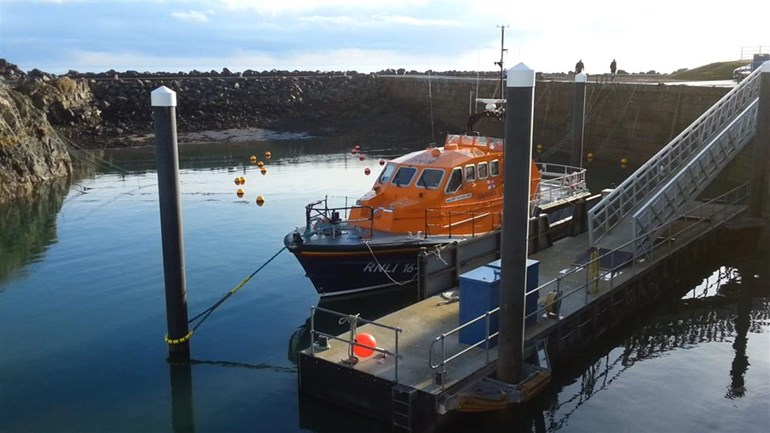 We had left Portpatrick in Scotland to sail to Peel in the Isle of Man. Even though the weather around the harbour had been clear, we had not got far along the coast before we hit winds gusting between Force 6 to 7 (moderate gale to gale force). After three hours we had travelled just seven nautical miles and the weather was not improving, so we decided to return to Portpatrick.

We lined up the harbour entrance and as we were entering the harbour, a huge swell hit us and suddenly we were steering 45 degrees off our initial course, straight into rocks in the narrow entrance. We turned away from the harbour and contacted the Coastguard and asked for assistance as the weather and sea state was continuing to worsen.

It was the RNLI boat that is stationed at Portpatrick that came out to offer us assistance. They came out and used the lifeboat to shelter us through the difficult entrance and we were able to follow them into the harbour.

Once in the harbour, they helped us tie up our yacht as we were still a bit shook up from the scare we had received. The RNLI crew were so helpful to us and friendly, they even invited us up to the crew room where we had a lovely cup of tea.

While we were there at the lifeboat station, they gave us advice on our route and the best departure times and the location of certain local dangerous waters.

We have always supported the RNLI but that day we really learned just how vital their role at sea is. They are supported by donations from the public - people like you - and you never know when you will need them to be there. Please support them by donating and ensure that they can continue in their vital work.

To watch a video of our adventure go to