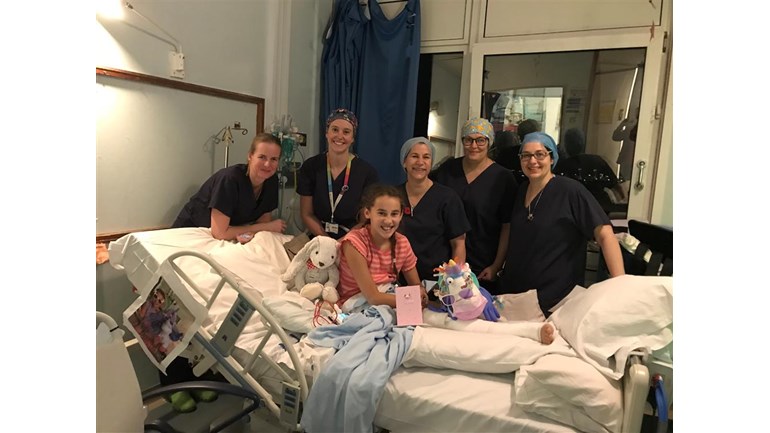 Southampton Hospital Charity supports our youngest patients by enhancing the Southampton Children's Hospital services and facilities so that we remain at the forefront of medicine and care.

This day last year the 15th September I did a simple every day job and cut Emily’s toe nails before we flew out to Italy for her to represent GB at the WAKO kick boxing world championships. She told me I squeezed her toe and it really hurt. It just looked a bit red. Little did we know the horror that was about to unfold and that the pain in her toe was the beginning of a rare and nasty staphylococcus infection that was to make a bore hole through her toe and up into her tibia to give her osteomyelitis, an infection in the bone. Despite her pain and being maxed out on painkillers she 10 cleared her first fight against Spain before having to withdraw from the competition and fly home early on the 20th as her pain and condition was not being helped or diagnosed in Italy. On the early hours of the 21st she was admitted to Basingstoke Hospital and as her condition worsened and her leg swelled I feared she may lose it as she was struggling to move her toes and ankle and compartment syndrome was feared. We were also told the infection was blood bound making her Septic.  On the 22nd September she was ambulance transferred to Southampton where in the night her condition worsened again and as ITU were briefed to expect her, I feared we might lose her. She asked me not to let her sleep as she didn’t think she would wake up. By the 23rd they managed to stabilise her enough to carry out the first of 13 operations to rid the bone of infection and eventually close the leg with plastic surgery. 9 weeks in hospital, three months of intravenous antibiotics and the most AMAZING  care from Southampton Children’s Hospital, our Consultant Kirsten Elliot and her wonderful team. I can’t begin to describe what a tough time it was but the team in G3 developed a fantastic bond with Emily and us as a family and made a difficult time so much more bearable. It was hard leaving and we do miss them all as you can’t help but create friendships. Emily too was an inspiration and kept in such good spirits despite her pain and incapacity.

After initially going back to school for 2 lessons a day in a wheelchair Emily gradually got back on her feet until until she was walking properly again. Slowly she got back to some training and today is doing really well. She’s still not allowed to compete or run flat out yet but her leg is slowly mending. She told me last week she feels like her career is over, her leg restricts her and she just wants to be back to normal but she still gets on with life and keeps smiling every day. We have antibiotics on standby for any skin or soft tissue infections which should treat any issues and i’m sure she’ll make it back to competition and get her final ‘all clear’ in due course.

We thank Southampton (and Basingstoke) and our lucky stars that’s she's here with leg intact. Hopefully some ever needed funds will help with all the great care Southampton Children’s Hospital provide and is our way of trying to give something back and say thank you.

All our friends, family and the kick boxing circuit were fantastically supportive through this time. If you can spare a few pounds to support us in thanking G3 we would be hugely grateful. The 22nd September (event day) is a year to the day Emily was admitted to Southampton so the Winchester half just had to be the event we took part in.

Southampton Hospital Charity supports our youngest patients by enhancing the Southampton Children's Hospital services and facilities so that we remain at the forefront of medicine and care.

Charity Registration No. 1051543
Find out more about charity fundraising