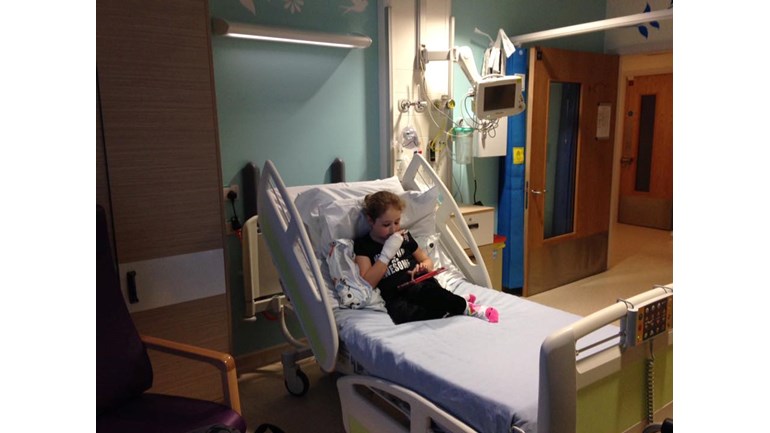 We support sufferers of NMO Spectrum to fight this terrible disease

In March 2016 we were caught wholly unprepared as our beautiful little girl Saffron woke up one morning unable to walk, and with a significant loss of sensation all over her body. Utterly confused and with little understanding of what was going on, we were eventually referred to the fantastic neurology team at Bristol Children's Hospital. Since then we have spent several months in hospital off and on, and Saffie's life has changed significantly.

After Saffie having a biopsy, a lumber puncture, giving blood too many tear filled times to count, and being poked and prodded incessantly, they were able to identify a rare condition known as Neuromyelitis Optica Spectrum Disorder (NMO). There are currently only around 1,000 cases of this identified in the UK, and it is only through modern diagnostic processes they have been able to both identify and classify Saffie’s condition. NMO is an auto-immune condition which can affect the spinal column and optic nerves. As yet they have not identified what can lead to NMO being contracted, and we are only able to manage her condition in the short term, with the threat of a relapse at any time being very real. In fact, despite being on a cornucopia of different medicines, Saffie had a significant relapse in November 2016, just 6 months after being diagnosed, and we are trying yet another medicine in an effort to get a handle on things.

The team at NMO Spectrum are doing all they can just to raise awareness of this condition, as it has often been incorrectly diagnosed, and in fact our doctors initially thought it was something else entirely. They are also desperately seeking to support any research in to more effective medicines that can have a long-lasting effect, although at this stage we are still very much in the wilderness. It has been predicted that auto-immune illnesses will soon kill more patients than cancer, and research for a cure or effective management solution as soon as possible is even more important.

Brett, Pete, and Gareth (me) will be stepping on the tee at dawn on the longest day of the year, to try and cram in 72 holes of golf before sunset. This will mean we each have to hit between 300 and 400 shots, and Gareth intends to walk the full distance (24,000+ yards or 13+ miles). Everyone was hugely generous last year when we took on the same challenge, and despite having torrential rain for the first 45 of the 72 holes we just about managed to get all four rounds in. With Gareth walking this year, we will be much tighter on time...

Anything you are able to offer will go towards raising awareness of this horrific condition, and where possible funding the research in to alternative treatment... and of course, ultimately helping our beautiful little girl get the help she needs to live as normal a life as we can manage.

NMO Spectrum-UK works with both the public and private sector in partnership with the NHS. We aim to provide direct support for sufferers, raise awareness of this terrible disease and fund ethical research into possible cure. Please visit www.nmo-ukresearchfoundation.org and view aims and goals.

Charity Registration No. 1158104
Find out more about charity fundraising