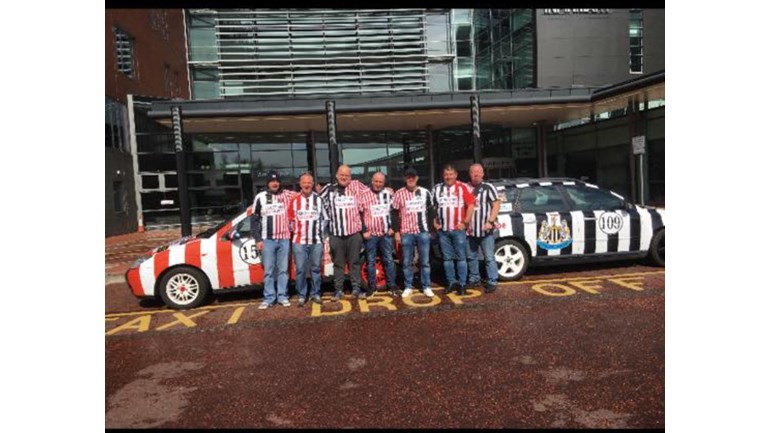 8 Grown men , 2 cars Durham 2 Benidorm for Children's Cancer Fund because we want to give something back to the wards

We fund equipment, toys & activities to improve care for children with cancer

A lot of you know the background to #Teamjoe but for all of you not familiar this is the serious side to Team Joe Benidorm or Bust
In September 2017 Joseph aged 17 became poorly .

He had several trips to the GP only to be told it was a viral stomachache .

He ended up in the A&E dept of UHND when it became apparent it wasn’t stomach ache .

The following day he was operated on and to everyone’s horror they found several tumours in his bowel .

After a weeks recovery Joe was discharged from Durham and sent straight to the Great North children’s hospital at the Rvi Newcastle.


He was diagnosed with Acute Myeloid leukaemia then followed a whirlwind of tests and surgery by the end of that few days chemo started.


He endured 10 days of intense conditioning chemo then received the cells.

Joe spent  9 weeks in isolation before he was well enough to come home. It’s now several months on and joe is slowly getting better he is still on a lot of drugs daily and under a lot of restrictions so normal life hasn’t returned as yet .

The family have been supported massively by the staff on wards 4 / 14 of the Great North Childrens Hospital at Newcastle RVI and will be for several years to come .


The Children’s cancer fund is a small charity who rely on donations and the money is used purely for ward 4 where children can be admitted for a few days or months and ward 14 which is clinic which children can attend daily / weekly/ monthly .


Thanks for taking the time to visit my JustGiving page.

The Children's Cancer Fund helps to improve the quality of life of children and teenagers being treated for cancer on Wards 4 and 14 of the Great North Children's Hospital. We fund play and social activities to help keep the children entertained and improve their well-being.

Charity Registration No. 1013899
Find out more about charity fundraising