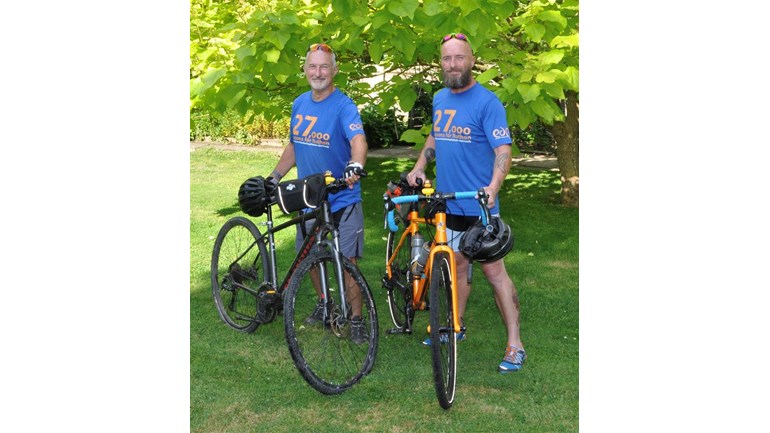 Hi my name is Malcolm and I'd like to thank you for taking the time to visit my Just Giving page. I have made this page in memory of my son Nathon James Jones, who tragically lost his life at the age of 27 on 13th May 2018 due to his problems with drugs and alcohol. Our family have been left heartbroken and devastated and words will never quite be able to express the emptiness left in all our hearts.  Here is the story of  the 27,000 Reasons for Nathon fundraising challenge:

Malcolm's son Nathon died at the age of 27.

He suffered from an addiction to drugs and alcohol that became too much for him, it affected him mentally and ultimately his addiction destroyed him .... After only 27 years of life, Nathon died on the street of a Dorset town.

Malcolm did eventually, with the help of his family, find the strength to fight his demons of guilt and resolved to help his son the only way he could think might make sense of the loss of his 27-year-old son.  To do something that might  just give back some value to his son and his sons short life.

EDP is a specialised Devon & Dorset charity that is set up to help people like Nathon.  The more resource they have, the more they can seek out the Nathons that are sadly growing in number in Devon & Dorset and ease them out of their addictions and back into a more sustainable existence.

Malcolm can't 'value' his son's life, he would say it is priceless.  He knows that he cannot raise fortunes, but he might just be able to raise £27,000.

And that sum will mean something to him and to all those millions of people who have sons and daughters that are growing up to be 27.

Malcolm's first fundraising challenge is to grow a beard for a year.  So far he has raised £2000 by simply growing his beard!  Which dramatically  demonstrates how much resonance his determination and the relevance of his cause have had on his immediate friends, family and community.  He's still got 3 months left of this beard challenge.  But it is not enough ....

His next challenge is to take part with his brother-in-law Colin in a 10-day cycle ride in Burma on the 2nd November 2019 . They are paying their own costs to get there, but hope to raise a further sizeable sum towards his goal of £27,000.  He will not stop fundraising until his £27,000 target is reached.

How much is your child's life worth? ....Impossible to answer.

Malcolm and his family would be very grateful if you could donate as much as you can to help this important and worthwhile charity, EDP Drug & Alcohol Services.

Malcolm did a special interview with EDP Drug & Alcohol Services recently and the film is very emotional to watch. However, it's a powerful reminder, if it were needed, that drug and alcohol problems can effect anyone, in any community, at any stage of their life. Take a moment to watch it here:

Malcolm is also busy training for the big Burma ride, raising awareness of drug and alcohol problems as he goes and of course raising as much money as he can for EDP Drug & Alcohol Services. Take a look at what he's been up to recently:

EDP works with people across Devon and in Dorset who have, or are affected by, drug and alcohol problems. Our mission is to reduce the harm caused by substance misuse and social exclusion through work with individuals, families and communities.

Charity Registration No. 297370
Find out more about charity fundraising