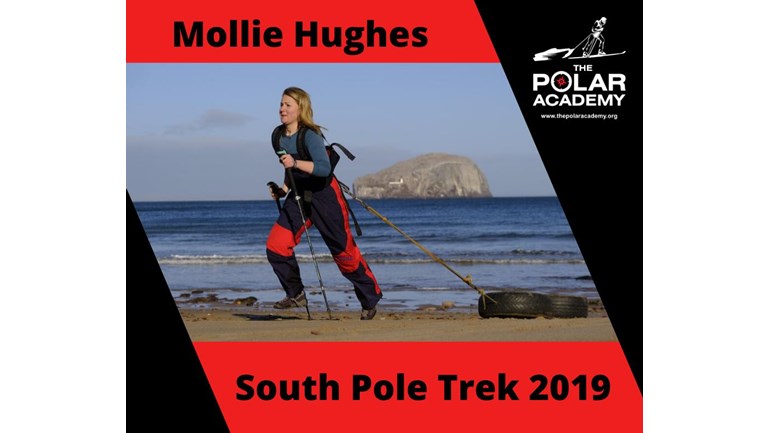 Fundraising for The Polar Academy

We inspire "invisible" young adults to be positive role models for their peers.

The Polar Academy identifies ‘invisible’ 14-17 years old secondary school children, crushed by a lack of self-esteem and gives them the chance to redefine their physical and mental limits.

Participants are put through a rigorous ten-month training programme before being immersed in the wilds of Greenland, navigating through some of the world’s remotest terrain for ten days. Their confidence soars with every step.

On their return to Scotland, each pupil shares their experiences with their peer groups, speaking to more than 20,000 school children in their region. They are living, breathing proof that dreams are attainable and that ordinary pupils can achieve the truly extraordinary.

Mollie Hughes (28), the Mount Everest record-breaking adventurer has announced her bid to become the youngest woman in the world to ski solo and unsupported to the South Pole. Mollie is also a guide with the Polar Academy and is passionate about inspiring the young people selected each year to undertake this challenge, some of whom are battling with mental health, to realise their full potential and achieve something truly extraordinary. Mollie would like to raise awareness of the incredible work of the Polar Academy while also raising some much needed funds to support the charity during her South Pole Challenge.

In 2017, aged 26, Mollie became the world’s youngest person to have successfully climbed both the north and south sides of Mount Everest, the world’s highest peak. Her next adventure begins in mid-November when she will leave from Hercules Inlet in Western Antarctica. Skiing eastwards, she will aim to reach the Geographic South Pole by New Year’s Day.

To achieve her goal, the Edinburgh-based and Devon-born adventurer and motivational speaker must ski alone and unsupported across 702 miles of the world’s largest desert and most unforgiving terrain. It is an immense physical and mental challenge.

When successful, Mollie will be the youngest woman by four years to achieve the feat. The current record for a woman is held by the Swede, Johanna Davidson, who was 33 years-old when she completed the same route solo and unsupported.

After leaving the south-west margins of the Ronne Ice Shelf, Mollie must successfully negotiate obstacles like crevasse fields and 6ft high wind formed waves of snow.

Her mental reserves and progress will be further tested by the need to haul her 75kg sled into a bone-chilling headwind in temperatures of minus 50C (three times lower than insider a domestic home freezer). Her only companion will be the wind, endless snowfields and a selection of audio books and music!

Charity Registration No. SC044605
Find out more about charity fundraising