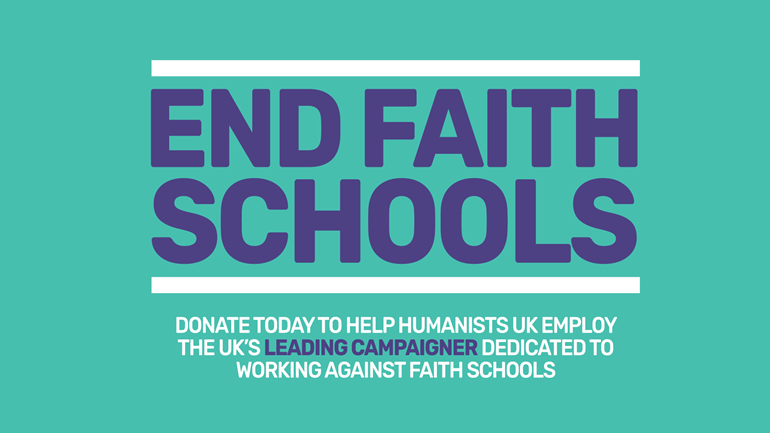 We bring non-religious people together to champion ideas for a better society.

Humanists UK leads the national campaign for an end to state religious schools and challenges religious discrimination in admissions, employment, and the curriculum. Since 2018, its Education Campaigns Manager has been Dr Ruth Wareham – who joined us having spent over a decade carrying out academic research on the subject of religious schools.

Ruth now leads Humanists UK’s work to defend the rights of children, parents, carers, and teachers in our education system, by campaigning for:

• An end to state religious schools and religious discrimination in school admissions;

• An end to closed-minded and narrow religious education and compulsory collective worship in schools; and

• Comprehensive and inclusive relationships and sex education in all schools, with accurate information about safe sex, women’s reproductive rights, and LGBT people

To do this, she needs your support. And we need your help in order to continue to employ her through 2020.

Over a third of all state schools in England and Wales – more than 7,000 schools – are already run by religious organisations. And in Northern Ireland, the proportion is much, much higher. These are schools that are legally entitled to discriminate against children on the basis of beliefs they are too young to confidently hold for themselves, and which serve to divide communities rather than bring them together. Shockingly, the UK Government seems committed not only to increasing the number of English religious schools, but to funding opening more fully religiously selective schools for the first time in over a decade. What’s more, by failing to take a strong line on how religious schools deliver relationships and sex education, it has also permitted the better interests of children to be swept aside in favour of the vested interests of religion at all levels of the education system.

We believe that children should be given the freedom to form their own beliefs and discover their own sense of meaning and purpose, without imposing any religion. We want schools that enable them to do this and which adequately reflect the diversity of British society, while emphasising our shared human values and how to live well together. At a time when society is more divided than ever, we think it is vital that children from different backgrounds learn with, from, and about one another in open and inclusive schools with equally open inclusive curricula. Unfortunately, that is not currently the case.

The work of our Education Campaigns Manager has never been more important than it is now. Her work must continue in 2020.

Key successes this year include:

•         Supporting two non-religious parents to win permission to challenge the way collective worship is conducted at their children’s school in the High Court in the first legal case on this subject. The case seeks to establish that children who are withdrawn from worship must be provided with a meaningful alternative of equal educational worth. A poll conducted by YouGov on behalf of Humanists UK showed that parents believe religious worship is the least appropriate activity for school assemblies, with just 29% saying it was appropriate.

•      Securing proposals from the Welsh Government that, as part of a huge overhaul of the national curriculum, will see the subject of RE should be renamed Religions and Worldviews, and the law changed to ensure the curriculum itself is as inclusive of humanism as it is of the major world religions.

•         Securing the first ever UK Government commitment for new legislation to crack down on illegal religious schools, ending decades of inaction on one of the education system’s gravest failings. Our Education Campaigner was speaking up for the children trapped in these schools long before anyone else was willing to.

•      Forcing a council to overturn its decision to refuse a humanist representative full membership of the body responsible for setting and overseeing Religious Education in schools in the area. The u-turn came in response to a legal challenge by us.

•         After 30 years of humanist campaigning since the introduction of section 28 in 1988, finally succeeding in making LGBT-inclusive relationships and sex education compulsory in both English and Welsh schools from 2020.

•         Achieving a huge advance for children’s rights by prompting the UK Government to give young people in England the right to make their own decision about opting out from sex education, rather than being entirely subject to their parents decisions, and by getting the Welsh Government to scrap the right entirely.

•         Finally securing the closure of the School Inspection Service, which had been responsible for inspecting independent Steiner and Exclusive Brethren schools, after exposing endemic failures in Steiner schools – including safeguarding issues, bullying, and the teaching of pseudoscience – going back several years. We also urged the Department for Education to consider closing failing Steiner schools after Ofsted found that three out of four state-funded Steiner schools to be inadequate.

•         Responding to all relevant official consultations across the UK, including a Department for Education consultation on new guidance for relationships and sex education; an Ofsted consultation on the new education inspection framework; numerous consultations on education and children’s rights in Wales, including on the new draft curriculum, RSE guidance, home education, a bill to repeal the defence of ‘reasonable punishment’ in cases of assault against children, and a call for evidence on children’s rights across the country; a UK Department for Education consultation on a proposed voluntary code of practice for out of school settings; and another on measures to improve safeguarding and education for children who are educated in settings other than school (including home-educated children and young people).

•         Supporting and advising hundreds of parents and carers whose children have been discriminated against in the education system on the grounds of their beliefs.

•         Meeting ministers and civil servants, and briefing MPs and peers, particularly members of the All Party Parliamentary Humanist Group (APPHG), on legislation related to religious schools and education in Parliament, as well as organising debates in the House of Commons and House of Lords on relevant issues.

•         Generating significant media attention for Humanists UK campaigns work, including coverage of our collective worship case on BBC Radio 4’s Today programme, and our campaign for inclusive RSE featured on BBC 2’s Victoria Derbyshire show and Radio 4’s Beyond Belief. Stories on our work also featured in every national newspaper, and received coverage on various national and local TV and radio stations throughout England and Wales.

•    Organising an open letter, signed by around 50 of the country’s most prominent scientists, science organisations, and science educators urging the Welsh Government to ensure that its new science curriculum explicitly teaches evolution from primary school upwards, and prohibits the teaching of creationism and pseudoscience as science. Signatories included Sir David Attenborough, Professor Alice Roberts, the British Science Association, the Association for Science Education, the Campaign for Science and Engineering, Revd Professor Michael Reiss, and Professor Richard Dawkins.

•    Working with the Accord Coalition to bring together over 180 high-profile activists – including Humanists UK patron Stephen Fry, former Secretary of State for Education Lord Kenneth Baker, leading social anthropologist Kate Fox, Rabbi Dr Jonathan Romain, and Neil Kinnock, along with directors of groups including the Runnymede Trust, UCL Institute of Education, and British Muslims for Secular Democracy –  to sign an open letter to the Secretary of State for Education opposing 100% selective religiously selective voluntary aided (VA) schools.

•         Sitting on the steering groups of the Accord Coalition for Inclusive Education, and working alongside other organisations like the Religious Education Council, Sex Education Forum, and the Equality and Human Rights Commission on issues of shared concern.

With your donations, we’ll be able to employ our Education Campaigns Manager throughout 2020 and continue to fund our work to curb the rise of religious influence and privilege in the education system. Any money donated over and above our target will be used exclusively on furthering Humanists UK’s campaigns.

If you’re a UK taxpayer, please also indicate that Humanists UK can claim Gift Aid on your donation so that we can reclaim 25p tax from HMRC for every £1 you donate.

Humanists UK is the national charity working for a tolerant world where reason and kindness prevail. Our campaigns and services help be happier and more fulfilled in the one life we have, and together we champion ideas for a better society. Humanists UK: Think for yourself, act for everyone.

Charity Registration No. 285987
Find out more about charity fundraising