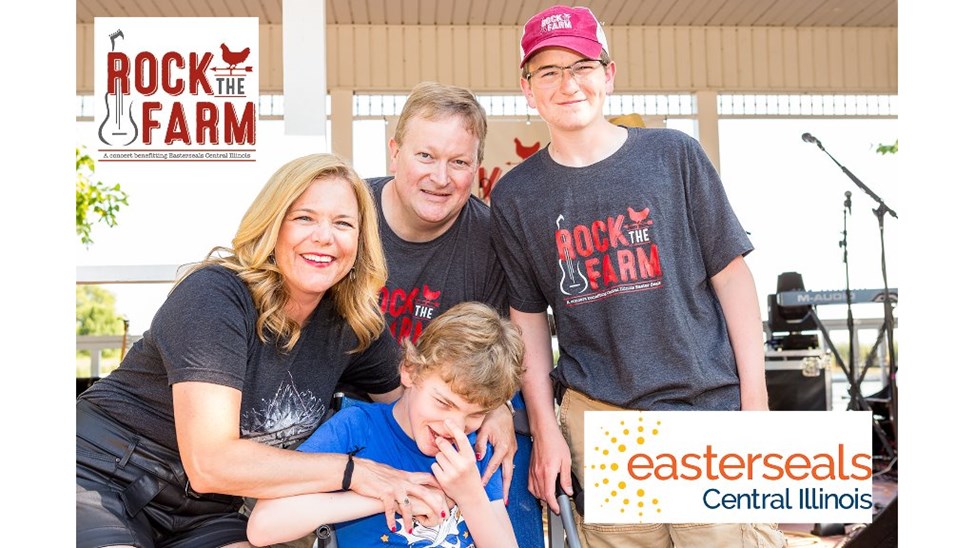 Team Alex fundraises in honor of a special boy -- Alex Camacho. Alex is a 12 year old boy who has received services from Easterseals since he was 5 months old. We raise money to give back to this incredible organization to help other kids like Alex!
Rock the Farm 2020
Charity Registration No: 370686250

Alexander Timothy Camacho, Alex, was born a healthy, premature baby in April 2007 to Ben and Angie Camacho and 3-year-old Zach. While under routine premature care in the Level II nursery in OSF, the Camacho's received a devastating call from the nurses: "You need to return to the hospital immediately. Your baby is dying."

Alex, with a 10% chance of surviving, is now 12 years old. He battled through that inciting event that caused brain damage and continues to battle obstacles every day. The first three years of his life were spent in doctor's offices, resulting in evaluations that never gave his parents any comfort of hope, or even a firm diagnosis of what they were facing.

When Alex was 5 months old, his pediatrician recommended Easterseals Central Illinois for assistive therapy. Since his time with Easterseals, Alex has made great strides and reached many milestones through Feeding & Speech Therapy, Occupational Therapy, Physical Therapy, Swim Therapy and more.

Though Alex has had many diagnoses and labels, he is an extraordinary kid who has touched lives and spread joy in so many ways. He adores music, riding his bike, school and the neighbor dog, Piper.

While working through his initial diagnosis of Cerebral Palsy, Alex's family began to realize that Alex was having trouble with vision. At 7 months old, Alex was diagnosed with Cerebral Visual Impairment (CVI), a neurological visual impairment, meaning the eyes functionally work but do not communicate with the brain effectively. CVI #1 cause of blindness in children in the developed world. But despite this grim fact, there is hope because with therapeutic intervention, CVI is treatable.

We're doing this together. Thanks to the generosity of our many community sponsors, your contributions through attending Rock the Farm or donating to Team Alex, go directly to furthering the education, awareness and treatment of CVI for many children and families. Thank you!

$0.00
Charities pay a small fee for our service. Find out how much it is and what we do for it.