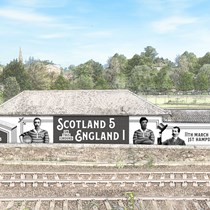 Weʼve raised £3,315 to fund the 1st Hampden Mural which will be a monument to the roots of the beautiful game.

Hampden Bowling Club sits on the site of the 1st Hampden Park, home to Queens Park FC and Scotland’s National Team from 1873 to 1884. This was the world’s first purposefully built international football ground and template for all modern football stadia. Furthermore this is where the Scotch Professors developed the modern passing game of football and exported it to the world, which is now played or watched by 3.5 billion people.

The Hampden Collection was established to promote and celebrate the 3 Hampden Parks and all that played on them. Our Artist-In-Residence, Ashley Rawson, has designed this mural for the rear wall of the Hampden Bowling Club Pavilion. This design not only includes this historic victory, clearly showing the dominance of Scottish Football at the time; but also depicts Scotland’s Andrew Watson, who is the world’s first black international player and played in this victory. Finally, this depicts Charles Campbell, a pioneer of Scottish football as President of Queens Park, SFA and one of Scotland’s greatest midfielders.

The First Hampden Park is a monument to the gift that Scotland gave the world and the foundation stone of the modern game. We are looking for your contribution to make this project a reality, which will add to Glasgow’s existing mural trail and support the heritage of this site.