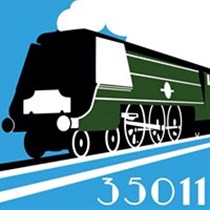 Weʼve raised £1,840 to help cover the cost to transport General Steam Navigation to her new home on the Swindon and Cricklade Railway.

The General Steam Navigation Locomotive Restoration Society is delighted to announce that Merchant Navy class locomotive 35011 General Steam Navigation will be moving to the Swindon and Cricklade Railway (S&CR) in Wiltshire in the spring of 2019. The S&CR is central to the majority of our members and volunteers living within in an hour and half radius of the line. Once the locomotive arrives at the site the Society will have a team working on GSN at least once a month to begin with and then look to make it weekly when the team gets more established and more volunteers come forward. We hope to have the locomotive on the line around late April / early May with a grand unveiling at our AGM at Swindon on Saturday 18th May.

The cost of the move has been priced up just under £9,000 which is where we need your help. We are fundraising to help cover as much as the cost as possible with the target being set at £4,000, the more money the Society can raise the more money that can be spent on components and help restore this mighty beast.

Trustee of the General Steam Navigation Locomotive Restoration Society who are restoring our Merchant Navy class loco to as built condition.