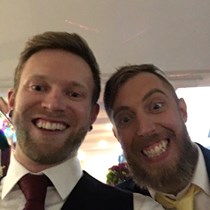 Weʼve raised £3,195 to Ensure the longevity of the Music and Memory Choir

Our challenge is the National Three Peaks, 24 hours to climb Ben Nevis in Scotland, Scarfell Pike in England, and Mt Snowdon in Wales, 13 hours of climbing, 11 hours of driving, 3064m ascent over 23 miles and 462 miles to drive between them. We are just a group of friends around 30 with full time jobs and young families, none of us walk for fun, most have never climbed one of these never mind all three non-stop! But we need to raise some money for our good friend and people in the local community so a big sum of money requires a big challenge. We plan to complete this on 21st July.

In September 2017 our good friend Dan was diagnosed with Terminal Early Onset Alzheimers at the age of 30. This was devastating news for all those who know Dan, not least because he had just become the father of twins (who also have a 50% chance of having this hereditary form Alzheimers) but also because there is no cure or treatment. Knowing his own fate was sealed Dan and his wife Jordan set about raising awareness and funds for research to help the future generations.

Dan is the kindest, most thoughtful, hardworking and funny guy you could ever meet, to know him is to love him. The doctors could not say how long he has or how rapid the progression would be, two years on and Dan has tried many natural ways to boost his body and mind and is on all the medication he can take to help but nothing does, the one thing that consistently makes him happy each week is attending the dementia choir.

Recently, as you may have seen on BBC1(or can catch up on the iPlayer with ‘our Dementia Choir with Vicky McClure’), that Dan has been taking part in the Dementia Choir. Dan has really enjoyed his time working with the team leading the choir and also getting to share some time with other people going through similar experiences with other forms of Dementia. He has made lots of new friends through the the choir, including Vicky McClure. This has been a great escape for Dan and something he looks forward to every week.

£3000 keeps the choir going for 20 weeks, this covers room hire, teas and coffees for the people who attend and taxis for everyone to be able to get to and from the session. Our aim is to raise as much funds as possible to keep the Choir going for at least another year. That’s another year of smiles and singing that brought these people together, another year of being able to reach new people to join the fight and another year of knowing that our friend has somewhere he can go and share experiences with other people going through such difficult times.

The choir not only helps Dan but has over 20 other regular members, it is a much needed escape for them, brings them joy and brings their families together where they can talk with people in similar situations. This money is going to help the people fighting Dementia in all forms RIGHT NOW, research for the future is vitally important however it will not help the people fighting Dementia at this moment, but that does not mean nothing can be done. Medicine may not be able to help them, but therapeutic sessions such as this can. Please help to support us to support Dan and others who attend the Dementia Choir however you can!