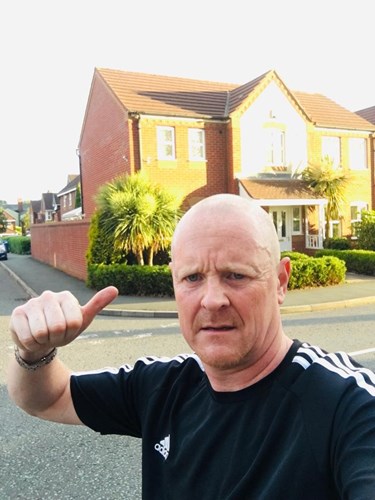 Aqueous Digital Sales Director, Ian Bold has now extended his already, mammoth year-long running challenge to raise money for two of Aqueous Digital’s chosen charities; Prevent Breast Cancer and Speed of Sight to the full year, in which time he will have run 10km every day between 1st January and 31st December 2021.

What started out as Ian’s personal new year’s resolution to keep fit has rapidly turned into a more serious athletic challenge and an opportunity to raise money for two very worthwhile charities.

Ian originally committed to running 10km daily without fail every day for a continuous 6-month period (183 days) which was a total distance of 1,830km, which is a whopping 1137 miles, which ironically is the exact distance, by road, from where he lives (Warrington) to his favourite European City (Barcelona) but now after managing to continue the challenge in 35+ degree temperatures, while away on a family holiday in France and Spain, he's now decided to continue, and in effect run back, in the aim of raising even more money for these two amazing charities.

A charity offering exciting track day driving experiences for blind and disabled people of all ages. Based in Bolton in Greater Manchester, we support them with their digital marketing activity while Ian personally supports the charity by marshalling at their track events. We are also a member of their Inspire25 Club

Prevent Breast Cancer is the only UK charity entirely dedicated to the prediction and prevention of breast cancer, they’re committed to freeing the world from the disease altogether. Unlike many cancer charities, they have focused on preventing, rather than curing. Promoting early diagnosis, screening and lifestyle changes, they believe can stop the problem before it starts. And being situated at the only breast cancer prevention centre in the UK, they’re right at the front-line in the fight against the disease.

Our Director, Emma Guy is a newly appointed Ambassador for the charity.

Ian and Aqueous Digital would be really grateful if you are able to donate towards the fundraising, no matter how small or large, all donations will be gratefully received by these fantastic charities and spur Ian on to his final finishing run on 31 December.