Our Target Reached, but we are still fundraising to 'keep their stories alive'!

Thankyou to everyone who has donated to make this meaningful tribute possible. All donations from hereon in will be put towards the Scampton Community & RAF War Graves Heritage Centre. You can read more about this exciting project to enhance the RAF heritage of Scampton following the closure of the iconic station here . Working with Heritage Lincolnshire , the project aims to encourage more schools to come and learn about our RAF heritage links, the stories of the people buried in the 107 War and Service Graves, and the work of our partners the Commonwealth War Graves Commission. On completion the Commonwealth War Graves Commission and other agencies will be able to provide talks and exhibitions to promote the wealth of RAF heritage at Scampton, keeping their stories alive.

RAF Scampton will close on the 31st December this year.

In these past few months we have seen in Europe how important it is to value the defence of our democratic rights. The personnel at this RAF station have done that for the last 100 years and as such they deserve to be remembered by the generations to come. As do the RAF personnel who are still doing just that, right now!

The aim of this project is to recognise the formation of 617 Squadron at RAF Scampton on the 23rd March 1943 (*), and to commission a commemorative stained glass window dedicated to them and to Bomber Command. The window to be installed at Scampton Church in time for 617 Squadron's  80th anniversary in 2023.

The window is designed by the celebrated glass artist Claire Williamson and is costing £18,000, plus planning permission costs. It features the 617 Squadron and Bomber Command badges, underneath which are representations of the floodlights fitted to the Lancasters to ensure they were at the correct height prior to releasing the bouncing bomb. The window also includes silhouettes of three Lancasters and an airman with bowed head. The humility of the figure, bowed before the cross, represents the sacrifice made by the eight crews that did not return from operation Chastise. We should also never forget the 1,066 personnel lost from RAF Scampton during WW2, and the 1,600 civilians who lost their lives as a result of the raid on the dams. 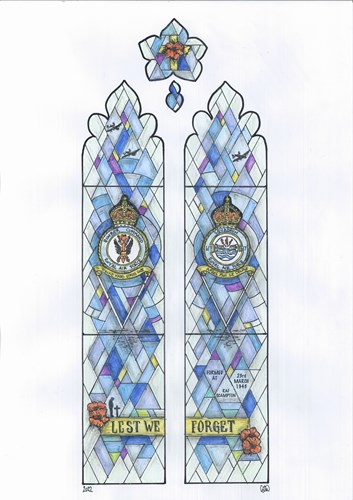 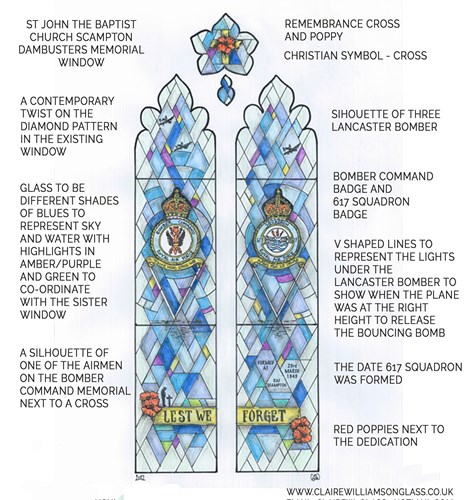 The 617 Squadron window will sit alongside the recently installed RAF Scampton Commemorative Window, thus completing a special honour and lasting tribute to the RAF, along the South side of the Nave, at Scampton Church. 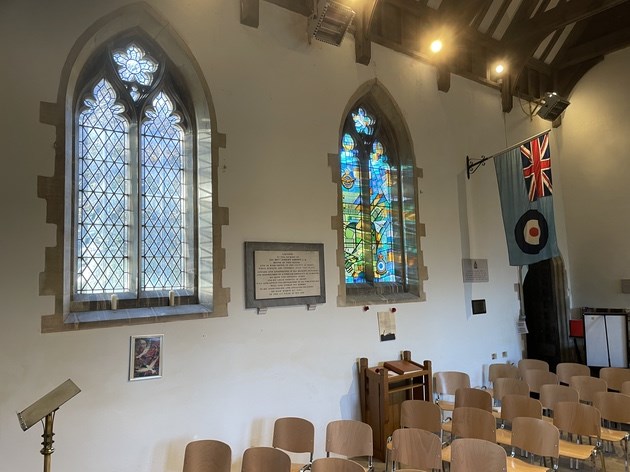 The project will be partially finacially supported by the Bomber Command Memorial Trustees, the RAF Historical Society, Lincolnshire Lancaster Association, 617 Squadron Association, and the Dambusters Inn Scampton, and on social media by the IBCC, BBMF, RAFAT, RAFM, CWGC, and RAFBF.

617 (Dambusters) Squadron, one of the most famous squadrons in the RAF, was formed on 23rd March 1943(*) under the command of Wg Cdr Guy Gibson VC, DSO & bar, DFC & bar. The Squadron is pictured below.

The Squadron evolved specifically for the famous Dams raids that took place on the night of 16/17 May 1943. During this raid, the Squadron employed the 'Upkeep', a bouncing bomb designed by Barnes Wallis. Of the nineteen Lancasters that left RAF Scampton that night, only eleven returned. The Squadron crest was chosen by HM King George VI and Queen Elizabeth, when they visited RAF Scampton on 27th May 1943. (pictured below) 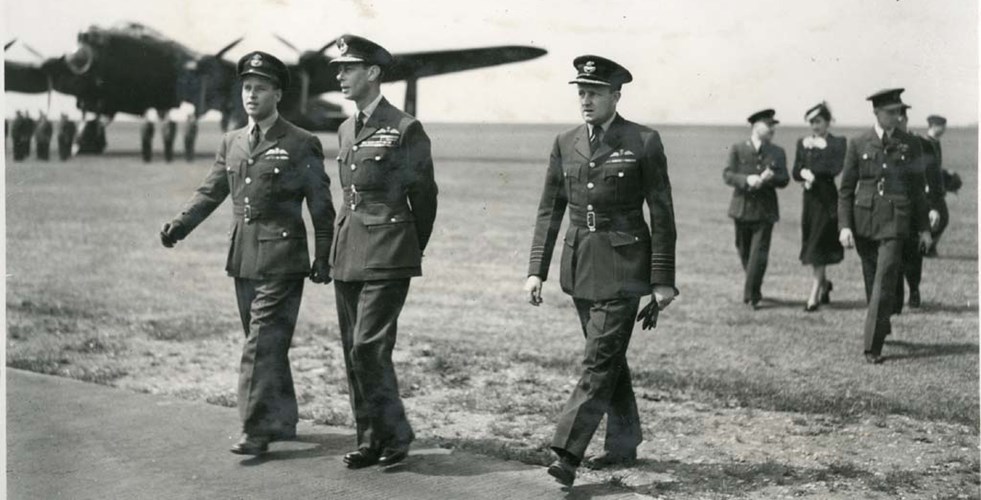 In September 1944 the Squadron was tasked to attack the battleship Tirpitz. Operating from Northern Scotland and Russia over a period of several months, 617 Squadron finally sank the Tirpitz on 12 November 1944. In the summer of 1945 the unit was allotted to ‘Tiger Force’ for operations in the Far East against the Japanese. The squadron moved to India in January 1946 but returned to the UK in May.

In 1952 it became the second squadron to convert to jet bombers and flew operationally in Malaya. The squadron disbanded on 15 December 1955. Three years later, on 1 May 1958, the unit reformed as a V-bomber squadron. 617 Squadron disbanded on 1 January 1982. Exactly one year later it reformed at RAF Marham with Tornado aircraft. The Squadron is still based at RAF Marham with F-35B Lightnings, to be deployed to the aircraft carrier HMS Queen Elizabeth.

If the crowdfunding scheme does not meet the target, the design of the window will be reduced accordingly. This may result in a vastly scaled down version of the artwork, simply featuring the squadron badges on plain glass. In the event of the campaign exceeding the target, funds will be put towards the Scampton Community & RAF War Graves Heritage Centre Project

(*) It has been confirmed by the Air Historical Branch (RAF) at RAF Northolt that 617 Squadron was officially formed on the signing of form 540 which was the 23d March 1943, and not 21st March 1943 as commonly believed when Guy Gibson first arrived at RAF Scampton. This is the date that time begins to accrue and which eventually - and crucially - determines when it will become eligible for the award of a Standard.

We believe it is incredibly important to retain the heritage of RAF Scampton and this partnership aims to share the story of RAF Scampton for generations to come. With your help we can make this happen.

If you would like to gift aid your donation please e-mail the amount you donated, your permission to gift aid it, and your full name address and postcode to rafwindow@scamptonchurch.org .

Other ways to donate can be found by visiting our website here: www.scamptonchurch.org/617squadronwindow

The aim of this project is to recognise the formation of 617 Squadron at RAF Scampton on the 23rd March 1943, and following RAF Scampton's closure to have a commemorative stained glass window installed at the station's church in time for 617 Squadron's 80th anniversary in 2023.