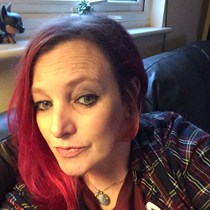 Given To Live got Luke to see Avenged Sevenfold!!

I started at Slimming World last week knowing that I need to lose at least 3 stone in weight when an idea sprung to mind "why don't I try to raise money in the process".

My goal is to raise as much money as possible for this amazing organisation called Given to Live. ( www.giventolive.com )

My 18 year old son, Luke, is autistic, has learning disabilities, a very rare syndrome, epilepsy, has a learning age of six and a heart condition. On top of all this his autism and learning disabilities does not allow him to make friends easily. He dreams of being a ghost hunter, a You Tuber and a member of a band.

One of Luke's biggest dreams was to go to a concert and see his favourite band Avenged Sevenfold. This is where Given To Live came in. They took care of everything and we were able to take Luke to the Motorpoint Arena in Cardiff to see his all time favourite band. We stayed in a top hotel, taken out for meals, Luke was treated to merchandise including artwork by a Given To Live artist.

The real delight was yet to come. Given To Live had somehow arranged for Luke to meet his idols in their dressing room, the biggest dream come true. He was treated like royalty by the most coolest guys, given presents and lots of photos and videos were taken to keep the memories alive. Once we said goodbye, it was time to watch A7X perform on stage..one word..AWESOME. As Luke's mum it was so overwhelming to see the joy in my boys face and knowing that whatever his future, he will hold these memories for a lifetime.

This would not have happened without Given To Live, they did so much for us that the words to say how much this meant to us as a family let alone to Luke. I hope this raises far in excess of the target so this organisation can make a difference to many other in the same position as Luke and our family.