Weʼre raising £3,000 to Pay for a bench in Memory of our good friend Zac to be placed near where he will be laid to rest.

Last year we walked 14 miles from the hare and hounds in Ramsbottom to Old Trafford in a bid to raise money for our friend Zac, who at the time was battling leukaemia. And whilst Zac won the battle against leukaemia we sadly lost him on April 15th.

Any money we Raise will be going towards having a bench in Zacs name installed as close to the cemetery as possible (council approval pending). With our last walk we had an unbelievable amount of support so if that happens again, and we really hope it does, any remaining money will be given to Zacs family to do with what they want, whether that be donate it to a charity close to their hearts or to take a well deserved holiday after they incredibly supported Zac through his two-and-a-half year battle. 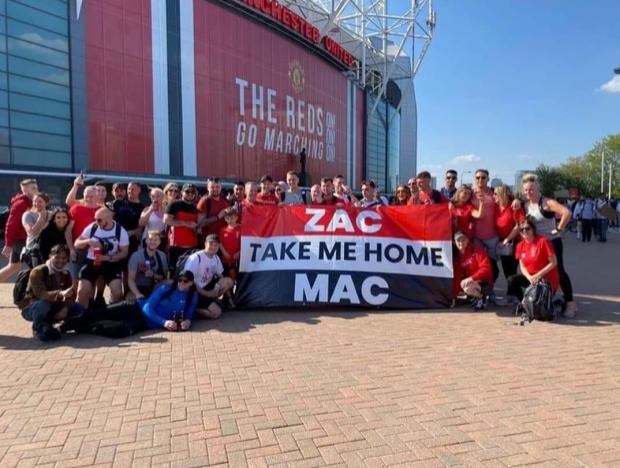 To tell Zacs story i am going to copy and paste a recent news article from the bury times, Please take a moment to support our walk and we hope we see an incredible turn out on the day:

Zac Macnally was just 25 when he was diagnosed with the form of blood cancer in October 2019.

He was then admitted to hospital before Christmas that year, where he stayed for two-and-a-half years before his death aged 28 on Good Friday.

He then worked as a fire technician, fitting sprinklers into new build apartment blocks and high rises.

His stepmother Karen Stringer said: “He was just a larger than life character that everybody liked and loved.

"He was a premature baby and his mum always called him a miracle baby.

“He went on to grow to a 6ft 3in lad full of character, everybody loved him, he walked into a room, and everyone noticed him, and he was always smiling.

"He was mischievous, he wasn’t always a saint, but he was very well-liked by everyone that knew him.”

His family spoke about how awful it was for them throughout the two-and-a-half years he was in hospital due to the pandemic halting hospital visits.

Karen said: “Zac was admitted to hospital before Christmas 2019 where he stayed for two and a half years other than very short visits home, I think he came out one Christmas.

“He had three birthdays in hospital, he was 25 when he went in, and he had his 28th birthday in hospital and three Christmas’s so other than very short times out he was basically in hospital for two and a half years.

“It was awful because at first, we could visit him he had his own little room and his friends used to come and go there was a constant stream of people coming in and out of the ward.

“But when Covid came he was left for long periods on his own in hospital and no-one could visit not even his mum Lynne or his dad Ian.”

Over the years Zac was in hospital, many fundraising events were set up to help raise money to help him.

One of the biggest events was when his friends organised a walk from Ramsbottom to Old Trafford as he was a big Manchester United fan.

Many people joined in with the walk and it raised a lot of money, and Zac was watching them via a video link from his hospital bed.

His friends are now planning after the funeral to do another walk but from Old Trafford to Ramsbottom as one of the songs he requested at his funeral was "Country Roads Take Me Home" and this reverse walk fits in nicely with this motto.

Karen added: “On social media there has been an outpouring of grief and love for him and there’s just hundreds of messages on there, poems and all sorts.

“He’s just the sort of character that would have loved a fuss, he was always the one stood up talking louder than anyone in a bar or pub.

"Friends has written about how they used to go out in Bury and his friends are just devastated as he was just a big part of so many people’s lives.

“He was a massive Manchester United fan but his favourite all time player was Wes Brown and when he was in hospital Wes actually sent him a video chat just encouraging him and he sent him a signed shirt.

“He also got a video chat from Scott Quigg the Bury boxer, that’s just the sort of person he was that even people like that wanted to try and inspire him and try and help get him well.

"It’s just so tragic that at age 25 he ended up in hospital and never came out.”

Zac's funeral will be on Thursday, May 5, and Zac will be leaving the chapel of rest on Crow Lane at 11.30am.

There will a procession following Zac to St Joseph’s Church for his service at 11.45am.

After the service, anyone who would like to follow to Ramsbottom Cemetery on Cemetery Road for a short committal service is welcome.

Afterwards, the Buchanan Club which will be open from 12.30pm.

There is no dress code, but it is expected that most people will wear red and white, and the family ask that it would be lovely if everyone could bring a red or white rose.