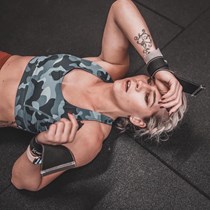 Cassie has had a very tough time with her health over the last 4 1/2 years she was diagnosed with bilateral breast cancer in August 2016 and they also discovered a lesion in her brain which they think is from the breast cancer. This stages her at stage 4, half way through her treatment she was told she had a melanoma on the sole of her foot as well.

Following Stereotactic Radiotherapy Surgery to the lesion in her brain she underwent a grueling 7 rounds of chemo. Cassie had to have bilateral lumpectomies and nodes removed from both armpits and she also has had to have a total hysterectomy.

Cassie had to undergo a groin dissection and have 10 nodes removed this has left her with acute pain from lymphedema. This now puts her at stage 4 for skin cancer.

Cassie works as a volunteer radio presenter for our local community radio station Mighty Radio here in Southport and has a mid-morning show 10am till 1pm Monday to Saturday and Sunday 10am till 12pm midday 7 days a week.

During lockdown she has been an amazing support for the community of Southport as she kept the listeners informed of all the local businesses that were trading and doing deliveries also compiling a huge list of the contact numbers and opening times and emergency numbers for people to be able to access she shared and updated this every day for over 3 months and made sure she was reaching as many people as possible in our Southport community. She has never missed a show at all for the last 2 years she has done her show.

Throughout all of this Cassie has still had to undergo her treatment for breast cancer with Clatterbridge Hospital Merseyside nurses coming to her home every 3 weeks where she has intravenous medications that she will undergo for life or as long as it is working.

Cassie also has to have immunotherapy treatment intravenously which Clatterbeidge nurses come to the house every 4 weeks to do. Along with scans and skin checks, heart scans and all the treatments she certainly has a lot to deal with.

The community of Southport are very proud of Cassie and despite all that she has gone through she has worked and continues helping and supporting the community.

During November and December of 2020 cassie had to undergo 5 surgeries to her left leg as the cancer had come back she never missed a show amd even did one of them from her hospital bed.

The Cancer had returned.

Unfortunately the cancer has returned and they can no longer operate. The only alternative not is to do a procedure called Isolated limb perfusion, which is very vicious chemotherapy. Without this treatment cassie has been told she is unlikely to reach this Christmas. There are only three hospitals that do this treatment Glasgow, Leeds and Birmingham.

Click here to learn more about the treatment Cassie so urgebtly needs https://www.macmillan.org.uk/cancer-information-and-support/treatments-and-drugs/chemotherapy-into-a-limb

The cost of the treatment is £4690. We‘re asking for £6000 to cover the cost of after care and travel. Our Cassie needs our help

Please donate, anything you can. In any way you can.

Can you please help to raise the funds for Cassie to get this procedure done.