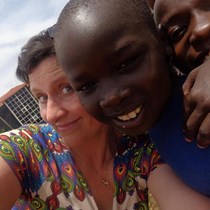 I am a nurse and midwife in a large slum in Kampala where I am challenged daily by health issues, so easily prevented or treated but only with the accessibility to money. I have been incredibly inspired by Charlie who I met 2 weeks ago, having been suffering from extensive oedema of his legs, anorexia, abdominal ascites (fluid in his abdomen)/ he had been treated by a local pastor for ulcers! However after a few days investigating with no definitive diagnosis, I found charlie in his home collapsed with severe abdominal pain. We had him admitted and he was taken to theatre where he was found to have severe peritonitis caused my multiple intestine perforations due to intestinal TB. This is treatable but having no money he sought the local healer and spiritualist believing it to be a possession of demons. He was hours before death. I have been raising funds from individuals for tests, medicines etc but his bill is now exceeding £1000 covering theatre, ICU and some vital medicines such as albumin....costing £90 per bottle. He needs 3 daily! This young man's life can be saved but not without long term care. I would really appeal to anyone interested in this area to help me raise funds to continue to pay for Charlie's care but also allow me to build up a fund that I can use to allow the next person to get lifesaving treatment of investigations within general health and maternity care. This could involve treating a child for typhoid, malaria and accidents, of for USS for pregnant women where there is a high risk pregnancy and to allow delivery in a unit with access to good maternity care. This is a huge challenge, which although relatively cheap.....when it gets to scenarios like charlie who has been left too long, then care is very costly and bills paid before treatment given. This will also provide me with an allowance for fuel so I will use my own car for transporting in emergencies.