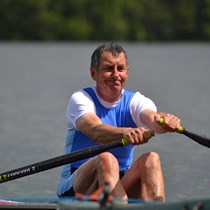 Weʼve raised £1,871 to build new changing rooms for Lakeland RC Juniors. I am rowing a 5Ok marathon to raise funds. Please support our Juniors by sponsoring me!

I'm very passionate about Lakeland Rowing Club on Derwentwater in the Lake District, a friendly and thriving community club that teaches local people of all ages to row.

I’m trying to support the club to raise funds for some much-needed changing rooms for its first independent site, which is due to open later this year. This very special little club has grown from 10 to 70 members in the past three years, including 30 juniors from both Keswick and Cockermouth schools. As a result, it has outgrown its current rented premises at Derwentwater Marina. The club has just signed a lease for a new lakeside site that will give it true independence and the ability grow and develop its rowing facilities for the whole community.

The club taught to me to row at the young age of 58, since when I have been inspired by its coaches and members to help it develop to its full potential. In the past four years, I have become a qualified rowing coach, which has given me the opportunity to help and support our junior members, some of whom are already enjoying success at British Rowing regattas.

I am also the club’s Development Officer and one of my roles is to raise funds for the new site. Through lots of hard work and ingenuity, the club has gathered £22,000 of the £27,000 it needs to develop the new site, and I hope to raise the final £5,000 for some basic changing facilities.

Helping to build Lakeland Rowing Club has become one of the most enjoyable and rewarding challenges of my life, both personally and professionally.

I hope you will be kind enough to support the club by sponsoring me for the Boston Rowing Marathon (50km) on September 17th. Thank you.

The club is a registered CASC (Community Amateur Sports Club) and is shortly to become a registered Charity for which I have been nominated as a trustee.

Helping to build Lakeland Rowing Club has become one of the most enjoyable and rewarding challenges of my life, both personally and professionally.