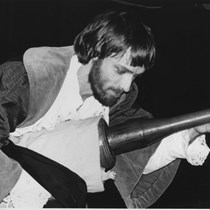 Ian! Allen has eleven ancient videotapes which were recorded sometime between 1978 and 1981. They are Sony Portapak 5-inch reels recorded in EIAJ-1 format, in case you were wondering: that's about 5 1/2 hours of video in total.

From the markings on the boxes we can be certain that 6 of them are a FASS show. The remaining 5 are either a FASS show or a Sumwat production (Sumwat was the first spinoff from FASS, putting on 4 plays over the same 4 year period).

While the videotapes are still readable I'd like to get them digitised. I can then perform what picture restoration I can on them. Andrew Wedman (ex-audio wizard from the FASS circle and now a recording engineer in Germany) has agreed to restore the audio. But first we need to pay for the digitisation!

The cost cannot be ascertained precisely because we don't know what shape the tapes are in, but it will be in the range $825 - $1,100. I'm happy to get the tapes to the digitisation people and do all the other running around but I can't afford the cost, hence this crowdfunding page. (Ths slightly larger target amount includes the charges associated with crowdfunding.)

I figure that there are enough interested parties (particularly those who are likely to appear on the videotapes) that if everyone pitches in we can get this done. If we can't get the required amount we can't get the tapes done, end of story. So please consider donating to this project. Naturally, if we don't reach the required funds (or if the tapes prove to be unreadable) any monies collected will be returned. Similarly, if we raise more than the needed amount, the extra will be given to a suitable charity.

If all goes well and we get the funds to carry out the digitization, the restored material will be premiered at the next Blast from the FASSed in February 2018 (yes, it's that close). After that the MP4 will be made available for anyone who's contributed to the cause.