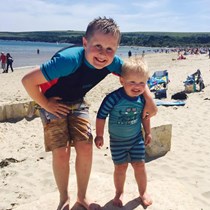 Frankie is an incredibly brave 10 year old boy, who is fighting a battle against bone cancer.
From being told by doctors 5 months ago that he just had ligament damage to his knee.
To then a mothers instinct telling her that something was not quite right, and taking Frankie to A&E for an X-ray.
He was then scanned and they received the devastating news that he had a tumour, which unfortunately had spread to both knees.

Frankie is currently half way through his 29 week course of chemotherapy.
He has recently had his first operation on one leg and now has a bionic knee, and will soon be having the same done to his other leg.

Everyone is amazed at how strong Frankie is and certainly lives up to his nickname 'Frank the Tank.'

We are raising money to help with the necessary extension to the family home, for frankies new ground level bedroom and wet room, and ramp to the outside of the property for easy access whilst frankie is still in his wheelchair.

Thankyou for your support,