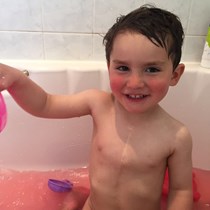 Weʼve raised £22,956 to give Freddy a fighting chance at life with life saving heart surgery

Freddy is a cheeky 4 year old boy. However, he has a extremely rare
and life threatening heart condition.
At 4 months old Freddy had an out of hospital cardiac arrest. We were told that there was only a 6-8% chance that he would survive. If he did survive we were told he wouldn't be the child we knew.

But miracles happen and Freddy survived. Due to the amazing work of the paramedics and incredible CPR by our neighbour, Freddy is now 4, but still battling this horrid condition.

Freddy was diagnosed with a cardiac tumour- a Fibroma in his left ventricle. The tumour is 5 cm by 3.5cm. It makes up much of his heart wall and fills 2/3rds of his ventricle.

The tumour causes dangerous heart arrhythmias which make Freddys heart beat in excess of 200 beats per minute and can lead to sudden death by him going into cardiac arrest.

To date Freddys has had 3 heart surgeries and has a defibrillator implanted in his tummy.

There is no cardiac centre in the UK that have any experience in carrying out this surgery.

Cardiac tumours occur in only 0.2 percent of the population. They are completely random and is not a genetic condition. Most children present within the first year of life and unfortunately 33 percent do not survive.

Boston Children's Hospital in the US is the leading centre in the world. From 1990 to date they have managed 27 cases. Since 2013 they have successfully removed 7 fibromas in children whose life threatening rhythms have disappeared once the tumour has been removed.

Freddys arrhythmia burden is controlled by medication. However due to serious side effects of the medication this is not a long term solution.

Freddy now needs to go to Boston to have life saving treatment to remove the tumour. Having a poorly child changes you as a person. You do not dare to look into the future and  you live in the moment. You face the fragility of life everyday

So we now need your help to perform another miracle ❤❤❤