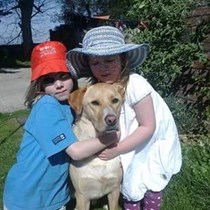 Weʼve raised £5,666 to Fund vet fees and ongoing care for our family dog who was visciously attacked by a loose dog.

On Saturday the 30th July our 15 year old son was walking our family dog home on his lead. Without warning a loose dog ran and launched itself at our dogs chest, pinned him to the ground and proceeded to tear the flesh from his chest and abdomen.
The owner of the dog merely whipped his animal with a chain type lead. Our 15 year old son had to repeatedly kick the attacking dog, our dog was able to break free when the attacking dog bit down on my sons shoe. Had it not been for the bravery of our son, our dog would have been killed within seconds. Fortunately our son was unharmed due to his sturdy shoes.
Our terrified son ran after our fleeing dog and rang for help.The owner of the attacking dog disappeared without any apology or offer of help. He did not come forward voluntarily, but has since been traced by the police and it transpires that the dog had previously been involved in similar attacks. The police have advised the owner of the extent of our dogs injuries and the trauma it has caused but he has not offered to pay for the damage caused.
At approximately 3.30pm we rushed our dog straight to the local vet, all in utter shock at the extensive injuries. After over 5 hours surgery including having cat gut grafting and stitching front to back Bodie was able to come home. He has since had to have 24hr care and another lot of surgery. He is facing his third surgery in just a 13 day period.
We cannot believe that another dog owner could be so irresponsible and yet there is no law that can force him to do the right think and pay for the damage.
In addition, we have discovered that our own insurance policy has expired unbeknownst to us and not been automatically renewed as normal due to an issue with the underwriter. We are devastated. Our dog has been insured for over 6 years and we have never had to make a claim, and in our time of need the cover is not there.
if you can, please, please help.

I am a mum of 4, desperately trying to raise funds to pay for the veterinary care for horrific wounds caused by a loose dog that launched an unprovoked attack on my dog.