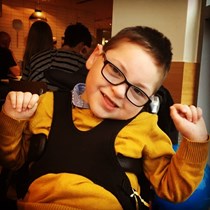 Hugh is a wonderfully happy 6 year old boy who delights in being outside in the sun and loves listening to music. However, Hugh was born with a condition that has left him unable to walk or talk, he is fed through a tube and spends lots of time in hospital due to severe seizures caused by epilepsy. Sadly, Hugh's condition is life threatening and he is unlikely to live until adulthood.

Hugh's family are currently adapting their house and garden to make it as safe and as accessible for Hugh as possible. With the help of generous friends and family so much has already been achieved. Hugh is now finally able to sit in the kitchen while his mum prepares dinner or paint and make play dough with his big brother at the table. Now he can go into virtually any room in his wheelchair, whereas before he was confined to just one or two rooms. This #BigBuild4Hugh has really opened up his home to him.

However, there is still work to be done. It is hoped that Hugh will be able to access his garden so that he can enjoy being out in the sunshine, playing in his swing and watching his brother play football. Previously Hugh's parents have been able to carry him into the garden, but now he is getting bigger it is no longer possible to do that. He needs ramped access instead.

Being able to spend quality time together is obviously very important to Hugh and his family. By raising money for them, we hope to help them do just that.

Jason Smith is running the London Marathon to hopefully, with your help, make this dream a reality. All donations are welcome and gratefully received.