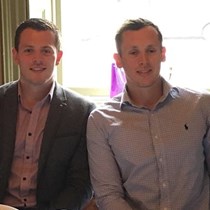 Will & I successfully completed The Fan Dance Summer Series on Saturday 8th July 2017. Will actually WON the event!

The Fan Dance is a gruelling 35lb load bearing, 24km non-navigational race over two sides of Pen Y Fan, the highest mountain in the Brecon Beacons. This infamous route has long been a part of SAS and SBS Selection and is considered the yardstick of a candidate's potential to perform well on Test Week.

Our Brother Harry, was involved in a serious hit & run accident on Wednesday 22nd February 2017, whilst on holiday in France with his girlfriend. He was knocked unconscious and left in the road of a ski resort. A passing car found Harry and called the French Emergency Services! When they arrived Harry was taken to Annecy Hospital and was not expected to survive the journey! The ambulance team managed to keep Harry stable, and put him into an induced coma for a few days while his condition became non-critical.

After 2 weeks of intensive care in France Harry was transferred by air ambulance to Bath RUH. He was admitted to the Helena Ward-a specialist Neuro Trauma Ward which struggles with funding for much needed specialist equipment! Here he was given exceptional care & neuro physio by an incredible team of people. Harry arrived in Helena Ward, unable to walk, limited upper body mobility & poor speech.

4 weeks later, Harry was able to walk out of the ward to begin the next stage of his recovery which he will continue to do for the foreseeable future.

Annecy Hospital kept Harry alive. Bath RUH got him on the road to recovery!

We cannot thank the staff of Helena Ward enough & it is for this reason we are asking you to support us in raising much needed funds to enable this fantastic team of people to continue their work.

Our friend Tom is also doing The Fan Dance for his Nephew Eli, who was struck by a rare neurological condition called Transverse Myelitis. Full story here...

My younger brother & I are raising much needed funds for The Helena Ward, Bath RUH. They started our elder brothers road to recovery after being involved in a serious hit & run accident in France. To do this we are running "The Fan Dance", a 24km SAS route with a 35lb bergen.