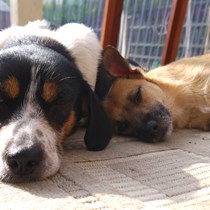 Weʼve raised £1,457 to Help the animals of Kefalonia by provided food, medical care, shelter and rehabilitation into hopefully a forever home.

In 2012 during a visit to Kefalonia Chris and John Ellett befriended a dog, they fed it and gave it water. When their departure time came they watched as the dog - locals called her Lily - walk away down the road only to see a man viciously kick Lily in the ribs. This image stayed with them and resulted in telephone calls on their return to England to try to find help for this dog. This is where they discovered ARK (Animal Rescue Kefalonia).
Chris and John raised funds for ARK before they returned to the island. As they presented the funds they were asked if they would take part in a rescue mission. Five dogs in desperate condition had been reported. What they found there horrified them both. Nothing could be achieved on this day but on a return visit they found that only two dogs remained. Blind, bloody, mite infested and bone thin were some of the things these dogs were dealing with. After a standoff with the farmer who owned the animals and the appearance of the police one dog was removed for urgent medical attention - Chris named this dog Choccy a chocolate brown Labrador. After urgent medical treatment Choccy recovered and has now found a new forever home in Holland.
John decided to do a skydive to try to raise more much needed funds. He succeeded in raising 5,500 euros with this and other fund raising ideas. Without the support of family and friends this would not have been possible and is why John calls it peoples fundraising event not just his.
For 2017 John is planning on more, and, more daring fund raising events. ARK along with another group called KAT's plus a donation to the running costs of the animal ambulance will benefit from Johns efforts.
Like the last Skydive event, the event next year is a people’s event, you are the ones that are going to make a difference, so please, can you support him in helping the unwanted, neglected, injured and homeless animals of ARK and KATS?

John has been helping the Ark animal shelter in Kefalonia for several years and on May 14th 2017 is to attempt a double event of a Skydive and WingWalk to help raise much needed funds for Ark and Kats and to make people aware of the important role they play on the Island.