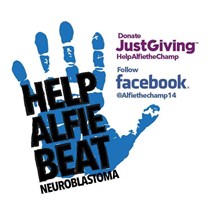 Weʼve raised £9,805 to Help Alfie get Antibody Treatment in the UK We have already raised £108,000 which has donated by so many fantastic and kind people.

We still have so far to go and still need your help and continued support.

Alfie Ward was born in Ashford Middlesex on the 25th May 2002; he weighed just 7lb 12.5 oz. Alfie started off life as a happy and healthy little boy that was until September 2005 when he was diagnosed with Ganglineuroblastoma. When this diagnosis came through Alfie was, just 3 years old and starting Nursery. Doctors agreed that they would keep an eye on it through doing regular routine scans. Despite this, Alfie developed into a lovely little boy with a cheeky disposition. He quickly found a love for Football, deciding that Chelsea would be his team. Unfortunately, at the end of 2007 during a routine MRI scan doctors found another lump in Alfie’s abdomen and in January 2008 he was diagnosed with Stage 4 High Risk Neuroblastoma. With Alfie due to become a big brother in May 2008 his mum and dad began to fear the worst……would Alfie ever get to meet his new sibling?

Alfie was soon booked into have an operation to remove the lump in his abdomen, followed by gruelling sessions of radiotherapy and chemotherapy appointments. Despite missing school Alfie’s Academic development never faltered. One thing was clear from the start Alfie continued to remain a happy little boy and always had a smile upon his beautiful face. Eventually came the long road to recovery. This was also the start of the remission step of Neuroblastoma. Alfie went back to school where he enjoyed being back amongst his many friends and like before he continued to do well at school.

Sadly it was not to last as during another MRI scan in December of 2011 the doctors found a query with the result. This resulted in more scans and tests. Although not diagnosed as a relapse of Neuroblastoma, the doctors decided Alfie needed to start an intense round of chemotherapy to shrink the thickening area they had found near Alfie’s spine and Kidneys. The chemotherapy unfortunately didn’t shrink the area enough and it was confirmed that it was a relapse of Neuroblastoma. Due to the area it was decided that an operation would not be performed as it would be too complicated and risky to Alfie. The next option was for Alfie to have MIBG Therapy; this did a good job of killing and shrinking the cancer cells. The next stage was cyber knife Radiotherapy, stem cell harvest and another round of MIBG therapy.

All of this got Alfie into Remission!

For two and a half years Alfie has been able to grow and develop into a typical yet lovely teenager. However in April 2016 Alfie complained to his parents of backache. His parents having that gut instinct took him to the doctors where he was sent for an X-Ray but nothing showed up! The Marsden in Sutton arranged for an MRI to be carried out and from that moment his parents knew that the cancer had returned. After MRI results and a MIBG scan it flagged up that 2 new tumours had developed on his back and just to the left of his spine. A biopsy was conducted and yet again it was confirmed as Neuroblastoma. Once again this family has had their whole world turned upside down by this monster. Alfie yet again has had to endure Oral Chemo, MIBG therapy and in July will be going through radiotherapy.

Our point in telling you all this?

Alfie is in need of Antibodies Therapy. Currently this treatment is not covered by the NHS for relapsed patients. This leaves us with the huge task of raising £600,000. All Alfie’s family want is for their gorgeous boy to have a chance to live and get rid of this awful disease once and for all!

Alfie is not only a son but a big brother to two wonderful little boys that adore their brother as much as he does them.

Please help us come together as a community and help this young man get to live.

Thank you for taking the time out to read about Alfie the Champ, anything you can do would be greatly appreciated.