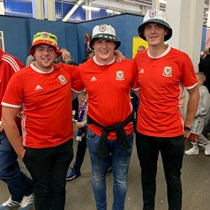 I am a 19 year old athlete, of which i specialise in High jump and Triple Jump. I have represented Wales multiple times as well as the previous Island Games, Jersey 2015. Recently i have jumped a Personal Best in the high jump, and i am jumping well and hoping for another Personal Best over in Gotland. As an individual all costs come to £650 excluding living costs. Being a part of team Ynys Môn really is a privilege to be asked to venture to amazing islands around the world competing, and doing what we love doing most. Any donation that anyone could help me out with, i will be deeply grateful for your generosity.
Thank you
Iwan

- What are the Island Games??
In the beginning of the 1980s the idea of organizing ”The Year of Sports” was born on the Isle of Man, with the highlight of the year being the Island Games.
Islands with similar history, heritage and geography were invited and in the summer of 1985 the first ever games were held. 700 participants from 15 islands participated in something that became an amazing success. The games were originally meant to be be once, but it was decided that the experience had been so good that they all wanted to do it again, this time in Guernsey in 1987.
NatWest Island Games has gone from 700 participants, 15 islands and seven sports to 2500 participants, 24 islands and 14 sports. Now it is Gotland’s turn to host, for the second time. But since 1987 in Guernsey the hosts has been as follows; Faroe Islands, Aland Islands, Isle of Wight, Gibraltar, Jersey, Gotland, Isle of Man, Guernsey, Shetland, Rhodes, Aland Islands, Isle of Wight, Bermuda and Jersey.
The following islands are members of the International Island Games Association: Alderney, Bermuda, Cayman Islands, Falkland Islands, Faroe Islands, Froya, Gibraltar, Gotland, Guernsey, Greenland, Hitra, Isle of Man, Isle of Wight, Jersey, Menorca, Orkney, Rhodes, Saaremaa, St. Helena, Sark, Shetland, Western Isle, Ynys Mon and Åland.