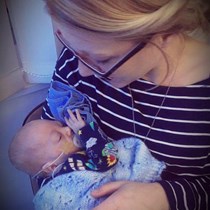 Weʼve raised £1,830 to give something back to the neonatal unit at Arrowe Park, in Jude and Rosie's names 💙💞

My baby boy Jude and his twin sister Rosie were born just 26 weeks into my pregnancy, weighing 2lb 1oz and 2lb respectively. I was terrified, having never really thought about the realities of such extreme prematurity. My babies were born on the 17th June, first Rosie and then Jude. The neonatal staff were there and started working on them straight away, putting them in plastic bags to help them retain heat, giving them surfactant to help their tiny lungs, then whisking them away to the neonatal unit. It was several hours before we were allowed to see them, the Drs were busy putting lines in them so that they could administer fluids and drugs, stabilising them on the ventilators that would breathe for them. Neonatal intensive care is terrifying and completely overwhelming.
On her third day of life, Rosie decided that she didn't have the fight in her. I will never forget seeing the consultant rushing down the corridor in the early hours of the morning, buttoning up his shirt as he went, having been called in from home to try to save our baby girl. 'She is receiving the maximum support that she would get anywhere in the world' he told us. For hours they tried to stabilise her, until we decided that she had been through enough. She died peacefully in my arms, the staff crying with us.
For the longest time I was convinced that Jude would follow his sister, he seemed to have so many setbacks and struggles. But each and every time the staff have supported him through and he is now a whopping 8lb 9oz and just working on his feeds before he can *touch wood* , come home where he belongs.
I can never repay what the Drs and nurses have given me, given our family. They gave Rosie a fighting chance at life, and the most dignified ending. They have nurtured Jude from a tiny scrap of life to a baby.
I need to give something back to help other babies who will pass through those doors in the future. To say thank you. Please help me give back, in Jude and Rosie's names xx