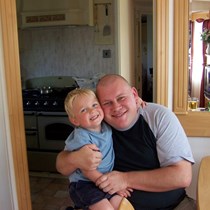 Weʼve raised £0 to In 2013, our neighbour asked us to visit him, he told us that he had terminal throat cancer and his wife had Alzheimers disease.....

In 2013, our neighbour asked us to visit him, he told us that he had terminal throat cancer and his wife had Alzheimer’s disease. He tried in vain to get his wife Dorcas into a care home however, his cancer was vicious and he died before he could get her into a home. We promised Les during his final days that we would take care of his wife; he told us he could not ask us to do that, we told him he didn’t have to ask, we were offering our help. After his death, his friend who he had asked to be executor of his will told us that Dorcas’s will left their estate to her nephew in Australia (50%) and charity (50%). Our neighbours had no family to look after her, her brother lived in Australia.
My wife and I took on the caring role and we cared for her until she passed away two years later in 2015. We gave her an extra 2 years in her home. This period put a massive burden on my wife and me both emotionally and financially; we could not work due to caring for Dorcas so debts could not be serviced and in January 2015 I had to take out a debt relief order. We try not to be bitter by the fact that we cleaned and cared for Dorcas 24 hours a day with no help. Despite knowing we were not in her will, my wife and me chose to care for her none the less – an act of which we are both very proud. We visited Dorcas 24 hours a day and did thisreligiously and although at times it drove us to despair; we knew she had no one and social services would not step in as they felt care was in place? Due to having to take out a DRO in January 2015 as we could not work due to caring full time for our friend we are unable to get a mortgage now to buy our council house. Just 140,000 people pledging £1 will make this dream come true for us. Please pledge and help transform our lives after our caring experience

I am a quality engineer with a wife and 4 children. I enjoy playing guitar, fishing and gardening.