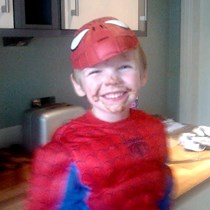 Lucas had never been ill, or had a day off school until 21st May 2015, when he was suddenly taken poorly. The following day Lucas was diagnosed with a brain tumour. Following a short battle, fought with great strength, courage and bravery, Lucas tragically passed away at home 11 weeks and one day later, just 4 weeks before his 7th birthday. Lucas was a massive Stoke City fan and comes from a family of season ticket holders. He was a keen footballer and enrolled on the City 7s scheme.