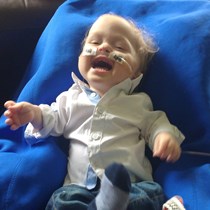 Weʼve raised £4,067 to help Michael with adaptations to the house.

We are fund raising for our little boy. We are raising money to convert our garage to a bedroom and bathroom for Michael. We get a grant but it's coming in £12k over this the moment!

He has achondroplasia, the most common form of dwarfism, chronic lung disease and many other health issues. He is on oxygen 24/7, on non invasive ventilation at night and is always at risk of having his lungs collapse. He also had not developed as expected and has very little head control, can not sit and is very small even for a child with achondroplasia(he is 2 and in 9-12 month clothes.) He also has a undiagnosed genetic condition which also comes with extra health issues.

The money will help to have the garage converted into a bedroom and bathroom downstairs. This is us thinking of future mobility issues but also more importantly at the moment, making him safe. At night if there was a fire we would not be able to get Michael out of the building as he is on oxygen so we would have to stay upstairs until help arrived.

We are having a raffle with tickets for £1 each. There are some amazing prizes( I have posted some of the prizes in my update as well as how to buy them)
We are also doing a sponsored bike ride/run around Grafham Water on the 17/9. Please message me on kirstlatta@gmail.com or via Facebook (Kirstie Latta) for further details.

In the afternoon we are having a family fun afternoon at needingworth village hall from 2-5. There will be a bouncy castle, face painting,magic, balloon animals, live music and lots of stalls!

Thank you for helping our little hero carry on smiling. x

Every penny will help towards getting Michael in a safe and future proof room .