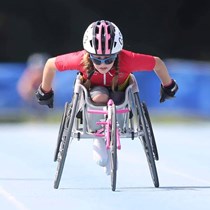 Neve was born with a congenital short femur in 2006. She was referred to Dr Braddish initially at the Birmingham Children's Hospital and then transferred to Great Ormond Street Hospital. Initially, everything went smoothly. The first leg lengthening operation in 2010 created 5cm of growth in her left femur and was a fabulous success. When it came to the next leg lengthening operation, everybody was confident of success and all was going well until first check up. The x-ray showed up a problem, a previously undiagnosed weak hip had dislocated during the early stages of the leg lengthening and all the work had to be undone and a further operation to correct the hip dyspragia. As a result, Neve went into a Hip Spica for 8 weeks. in 2014, it was agreed that we would try leg lengthening again, this time under the consultancy of Professor Roposch (As Mr Braddish had sadly for us retired). Again, Neve was fitted with a frame on her left leg and the process started. Weeks later, at the first check-up, the fears of failure were realised again and the frame was removed and another hip operation performed. A second Hip Spica was needed which Neve had to 'wear' for 8 weeks including for her 8th Birthday. In 2016, following the lack of success in leg lengthening, Neve underwent another operation, this time to start the process of leg shortening.

All of this has not stopped Neve from taking part in sport. She has represented the school in the Panathlon, Golf, Tennis, Football and Swimming. She loves all aspects of competitive sports. She has completed the Midlands Fun Run three times in her wheelchair raising money for the charity STEPS and Great Ormond Street Hospital. In June 2016, following discussions with local athletics coaches Andy Paul and Job King, Neve started to get involved in Wheelchair Racing with Coventry Godiva Athletics Club. She has been inspired by Paralympians Mel Nicholls, Kare Adenagan and Ben Rowlings and now needs some support in funding a wheelchair.

The Allen Family have been fundraising for STEPS and GOSH over the last 10 years through a variety of events e.g. the Midlands Fun Run, Football Matches and Keep Fit Classes. In October we are running the Birmingham Half Marathon - this time to raise funds for a racing wheelchair