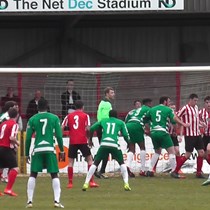 Weʼve raised £5,733 to Save Northwich Victoria Football Club from folding. We have just 48 hours to raise this additonal money to the FA.

Northwich Victoria were formed in 1874 and named in honour of the reigning monarch, Queen Victoria.

The Northwich Victoria Supporters Association have been working tirelessly to buy the club and take it out of administration for a number of months and on Monday was dealt a final blow by the FA who have put a deadline of Wednesday 14th March to bring the club out of administration or it will be folded. The club held an emergency meeting with its supporters and managed to raise £11,000 of the £16,000 required and therefore we have turned to the supporters, friends and family of football all over the UK to see if anyone no matter how big or small the donation can help us across the finishing line. As a group of supporters we are overwhelmed by the response so far and will be forever grateful if you can help to save our proud historic club

During the 2016 - 2017 season the club supporters have contributed a staggering £66,000 to keep the club going and today came the final battle as the FA have ruled that to take over the club as a supporters run club we need to have all the remaining creditors paid in full by Wednesday 14th June by 5:30pm.

Our appeal is to any football fan, player or individuals that can help us get across the line no matter how big or small the donation to save our club and we will be very gratefull recieved and we will be forever thankful for joining our battle to save Northwich Victoria Football Club