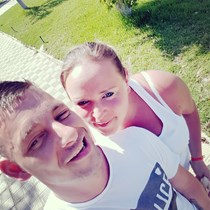 Weʼve raised £750 to help pay for IVF treatment as the NHS say we do not meet their CRITERIA for funded treatment!!

All we want is a family of our own! It should never be this hard!!

Mothers Day 2017 we found out that Kel was pregnant and we were over the moon. We've been trying for almost 7 years and have lost 2 in previous years so this was EVERYTHING!! It didn't take long before it all went wrong. March 29th, a routine scan hinted at another ectopic. We were DEVASTATED. Kel needed surgery and lost her right hand tube.

We had already tried our luck with IVF but just couldn't afford the thousands they wanted. Hundreds of £££s for consultations and blood tests!! We even looked into egg sharing. But it wasn't to be. Unfortunately Kel carries the Cystic Fibrosis gene and is unable to share her eggs!!

So imagine our joy when just 9 weeks later we find out Kel is pregnant again!! May 23rd.... I couldn't believe it when she told me on the phone. I've still got the pic she sent too of the pregnancy test!! Because of why had happened previously the doctors were actually on board and although too early for a scan they were happy to take bloods and get things moving. HCG (pregnancy hormone) levels were good. THIS WAS IT. THIS WAS OUR TIME. AFTER ALL THE PAIN THIS WAS IT!!

Last Saturday my wife, Kelly was rushed into hospital. ANOTHER ECTOPIC!!! This one ruptured Kels last tube. She suffered from massive internal bleeding and needed a blood transfusion. My wife almost died and I was helpless. I stood and watched as she begged for the nurses to help, heard her cry out in agony and waited hopefully when she went for surgery.

There is NO CHANCE EVER that I can make my wife pregnant. NONE!!

Just think about that!!

so this is our page..... most of you know me n Kel so know what we are going through. Those who don't..... it's all outlined on here. Thanks to everyone for your support, kind words and just generally being there for us x