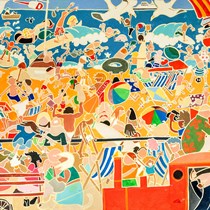 Weʼve raised £1,020 to Save the PLUTO Pavilion at Yaverland, a last relic of the extraordinary WW2 Pipeline Under The Ocean that supplied the D-Day landings.

The little wooden pavilion was built in 1932 at Browns Golf Course, designed by the famous Henry Cotton. In 1943, it was requisitioned by the War Office and it began to play a part in the extraordinary top secret Operation PLUTO; a mind-bogglingly ambitious engineering project, Lord Mountbatten's "impossible" plan, became vital to the success of D-Day! Early in the planning of the invasion, the need for large quantities of fuel to supply the advancing ground forces became a real concern for Allied commanders. They knew that as the German army retreated it would destroy fuel storage compounds and as Allied troops advanced through Europe it would be vital to ensure that there was fuel for vehicles. Torpedoes and air attacks would make shipping across the Channel impossible. PLUTO was a phenomenal effort that saw D-Day fuel pipelines rapidly laid across the country to Sandown Bay and on, under the Channel, to Cherbourg.14 pumps at Sandown were hidden in the zoo and the golf course, but almost all of this military effort that once dominated an entire coast is now gone. All except the miraculous wooden pavilion at the bottom of the golf course! This was in fact part of PLUTO’s military infrastructure, disguised as the groundsman's shed it was before, and after, the War Office commandeered it for a bigger role! It remains almost exactly as it was 65 years ago. Its survival is so remarkable and poignant, and its history so fragile, we must make sure it survives and tell its story. We’ve raised enough money to replace the rotten roof but we are still short of the amount we need to repair and replace all the walls. The whole building is close to collapse now and our mission is to restore it to exactly its original design (it is Listed no. 1391723 so everything has to be just so!). We can then protect and preserve the contents and begin the work to deliver public access and proper interpretation to this amazing little building!!

The Bay Area, Isle of Wight

The Common Space is a not-for-profit organisation set up to improve community spaces and public realm across The Bay, on the east coast of the Isle of Wight. TCS projects are all about making places better and healthier, for the people who live here and for those who visit.